On Friday, January 14th the varsity girls basketball team took on Cary Christian in a game to cap off their week. While the team has been fighting a thin line up due to sickness absences this is the first time they have played without the senior leaders Aysia and Ingrid at the same time. This was a great opportunity for the team to capitalize on and for new players to rise to the occasion. But instead of just a few people stepping up the entire team stepped up! Rebecca Driggers was glued to their best player and make outstanding defensive play. Eliza Everett contributed 10 rebounds to the defense and Kyra Parker led the team offensively with 17 points. The team finished the win with a score of 37-11. Coach Alan Hinnant said "we got better tonight and that is what makes me happy and proud." The team is looking forward to a long weekend of rest before a packed week of three games coming up next week. They play again at home on Tuesday, January 18th at 5:30pm against Friendship Christian School.

The girls varsity basketball team traveled to Arendell Parrott Academy on Tuesday, January 11th and notched their conference play on the road with a win. The team started off strong attacking the opponent on their home court and moving the ball around selflessly. The girls, as has been the case with most of their season so far, played tough and relentless defense. They outscored the Patriots in both halves finishing with a score of 43-26. Standout players include Aysia Foster who put up 16 points and Kyra Parker who contributed 10 points. Coach Alan Hinnant mentioned that he is "very proud of the effort and energy we played with. I'm looking forward to carrying it forward into our next game against the Saints." The team will travel to St. Mary's on January 13th and look to continue their pressurizing defense. 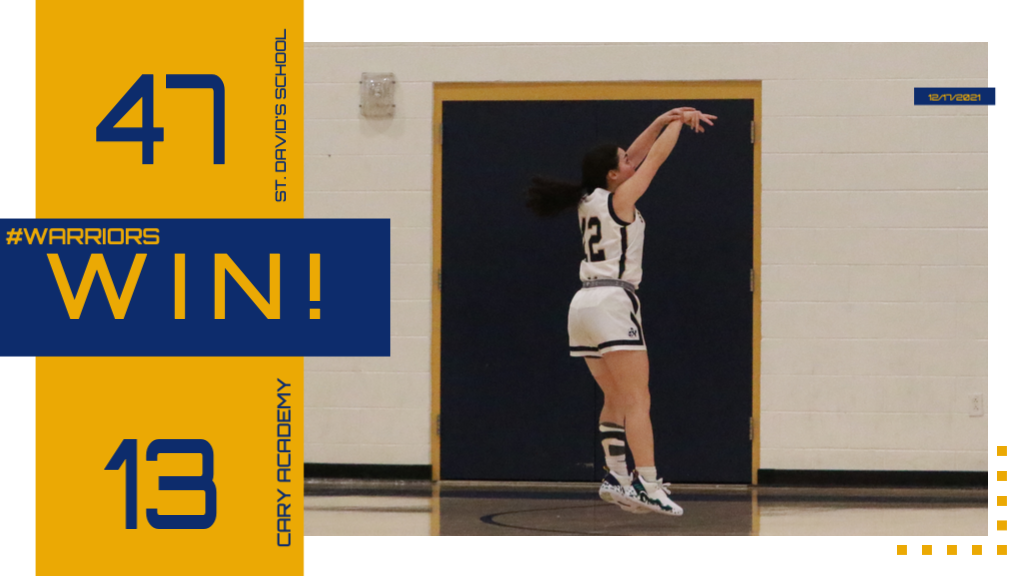 Friday, December 17th, as the last week of school closed out, the Warriors took on Cary Academy in an away game. The ladies started scoring early and putting up points and getting good looks as a result of their excellent ball sharing lately making really great team efforts to score. Some late play-making by Cary Academy kept the Warriors on their toes but they responded. Ingrid lead with 21 points and Aysia had 12 points.

"We are really satisfied with how we played tonight. There is still work to be done on the offensive end of the floor, but when our defense is playing well it helps cover up some of our mistakes in the half court offense," said coach Alan Hinnant. They are back on the court Monday, December 20th to kick off a Christmas tournament. The competition will be great and will be a good opportunity to compete before the break.

The Varsity Girls team played Thales at home last night, December 15th. The team powered through Thales finishing them off with a 55-3 defeat over the Knights. The crew started off strong and didn't let up, never giving the opponent a chance to fight their way back into the game with their signature scrappy defense that really tends to frazzle the other team. The win was a group effort with everyone coming off the bench and supporting the defensive efforts and with many contributing offensively. They team has continued to improve by learning to share and ball offensively and really distribute the ball around the court until the best possible opportunity comes through to score. "It was great to see all of the girls get to play a lot. "They did a great job defensively and everyone did a great job on offense. It was fun to watch", said Coach Alan Hinnant. They Warrior play again on Friday, December 17th at Cary Academy and will be back on their home court over break for a tournament. Come support our Warriors!

The Varsity gils closed their week of games out with a home game against Forsyth Country Day on Friday, December 10th at home. Early in the game they played really well in front of a Christmas crowd and build an strong 8 point lead pushing them into the second quarter ahead but a quick run of 7 points from Forsyth closed out the half with a tight 21-20 game. The back-and-forth game continued through the third until, in the fourth quarter, the team lost some steam and were outplayed in a few moments of the game where Forsyth took advantage of the mistakes made. "Our team played well, we just need to clean up a few mistakes if we plan to compete with the best teams in the state. We will learn from this and grow," said coach Alan Hinnant. The Lady Warriors play again on Tuesday, December 14th against Thales Academy at home. Please come support our Warriors! 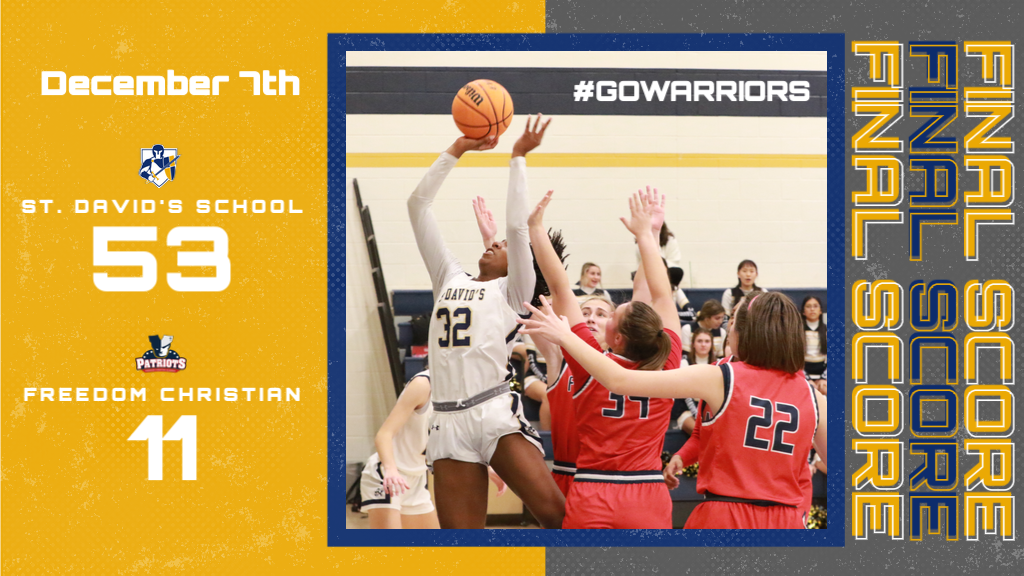 The Varsity Girls basketball team played Freedom Christian Academy at home on Tuesday, December 7th after coming home from their two wins on the road in Wilmington last weekend. Their suffocating defense continued through the game with a really great start both offensively and defensively. Their pressure held their opponent scoreless through halftime and remained so until they posted a 41-00 lead, at which point the frustrated opponent finally broke through our defensive end and posted a few points to the board breaking their silence on the boards. The Warriors lead against Freedom Christian remained strong and ended in a 53-11 victory. Their success was had with well-rounded contributions from all on the court and despite a few injuries from their Senior leadership who are sidelined, the team carried on the win decisively just as usual leaving them with an unbeaten record of 7-0. The girls will hit the court again on Friday, December 10th against a very talented Forsyth Country Day School, who will finally put our crew to the test. Please come out and support our Warriors and don't forget to wear your "ugly Christmas sweater" to participate in the Christmas spirit game! 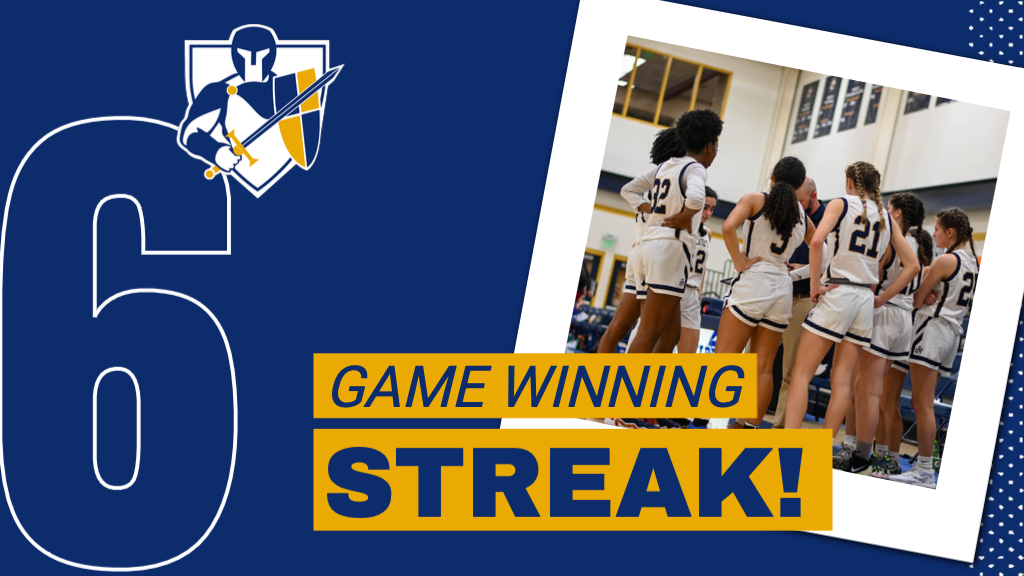 The Varsity girls basketball team has had a tremendous start to the season winning our first 6 games. Holding our opponents to an average of 23 points per game, there is no question their defense has been our calling card to start the season. Over the weekend they traveled to Wilmington to play Cape Fear Academy on Friday, December 3rd and Coastal Christian on Saturday, December 4th. Against Cape Fear the defense played really well scrapping through the court and putting pressure on the opponent really starting to show its potential. The team shared the ball well and had a balanced attack which makes them hard to defend. Kyra Parker had 15 points, Ingrid Mello had 16 points and Aysia Foster had 13. They finished with a 53-18 victory over Cape Fear. This suffocating defensive trend continued on Saturday where Mello, A. Foster and Maya Foster scored in double figures again with 16, 14 and 11points respectively. They finished with a stifling 52-12 win over Coastal Christian.

The Varsity Girls Basketball will play Freedom Christian Academy on Tuesday, December 7th and Forsyth Country Day School on Friday, December10th. Forsyth is also undefeated and is expected to be one of the top teams in the state. Be sure to come to out and support our teams this week at their home games! 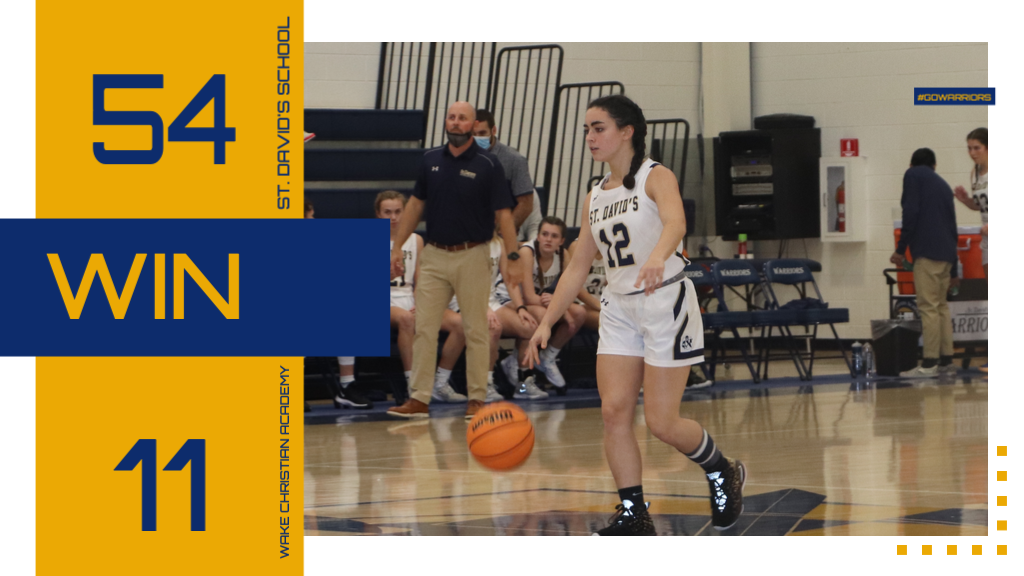 Varsity Girls Basketball got back to business on Tuesday, November 30th after a long rest and break over Thanksgiving. They took on Wake Christian Academy in one of a string of many away matches before they will return to their home court on December 7th. With a scrappy and suffocating defense the Warriors held the Bulldogs to just 11 points. Their offense is still developing put they posted 54 points in the victory and "played really well as a team" Coach Alan Hinnant said. He added that it was great seeing them share the ball and spread the offense evenly across their many talented player. Ingrid Mello lead them with 23 points but Eliza Everett and Maya Foster also put up critical points for the group. The team will travel to Wilmington this weekend where they'll play Cape Fear Academy on Friday, December 3rd and stay the night to take on Coastal Christian High School the following day. 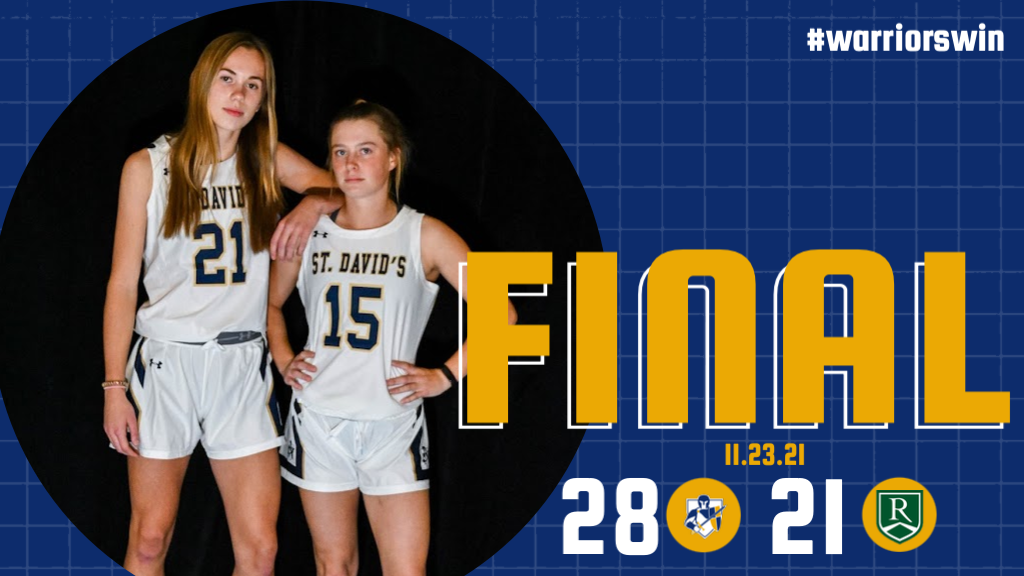 The 2 and 0 Varsity Lady Warriors played Ravenscroft on Tuesday, November 23rd in an away game that went our way after our girls toughed out strong win that came from the backs of their defensive effort. "The defense definitely carried us to victory", said Coach Alan Hinnant. With timely turnovers from pressure by the Warriors and clean offensive plays the Varsity Girls notched another win taking them to an 3-0 record with this 28-21 win. The girls are nursing some injuries which they hope the break will help heal and have them come back ready to go in early December where they will press on in their season. They return to competition on November 30th at 5:15pm in an away game at Wake Christian. 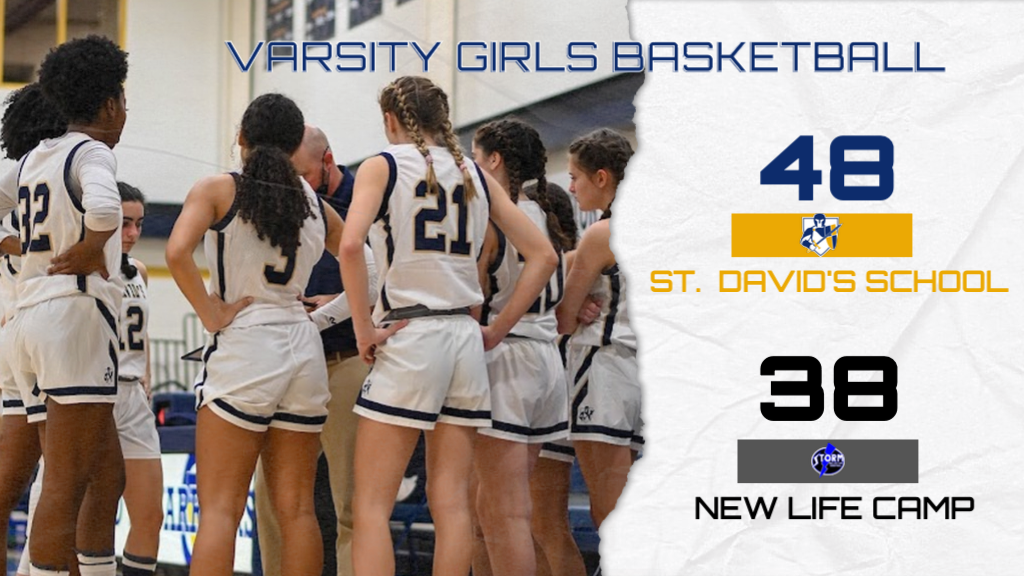 The girls Varsity Basketball game on November 20th was well attended by a big support group and fans spiriting a Somewhere on the Beach theme in the stands. With the support of a great crowd at a Friday night game the Lady Warriors took to the court against New Life Camp and started slower than they would have liked. The Storm came out posting points on the board early and finding themselves on their heels early in the game the Warriors needed to respond quickly. Bringing up the intensity in the third quarter the team started to play well from then on and did a much better job defensively putting pressure on the Storm gaining steam in the score gap. Freshman Eliza Everett posted 10 points and 8 rebounds and the team finished with a 48-38 win. The Warriors are back on the court on Tuesday, November 23rd at Ravenscroft. 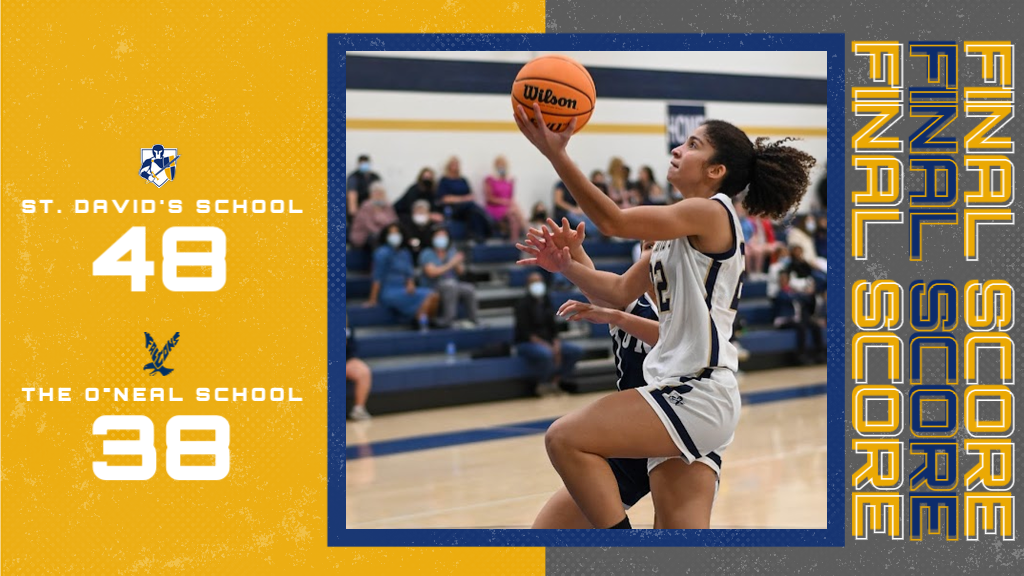 The Warriors first home match against The O'Neal School on Wednesday, November 17th ended victoriously after a hard fought, clean match to start their season. The Warriors got an early jump on the ball and posted a string of points on the board for an early lead led by hot shooting from Seniors Kyra Parker and Ingrid Mello. The team's defense was powerful and effective as they put a tremendous amount of pressure on the O'Neal School causing some beneficial turnovers and costly mistakes on their end. Late game free throws and continuous effort on defense made for a strong finish. Parker finished the game with 17 points, Mello finished with 13 points and Aysia Foster notched 11. ​Coach Alan Hinnant added that he is "very happy for our team to start the season 1-0." ​The Lady Warriors play again Friday, November 19th in another home match-up against New Life Camp at 5:30pm where the students and fans will join in the theme of Beach day!