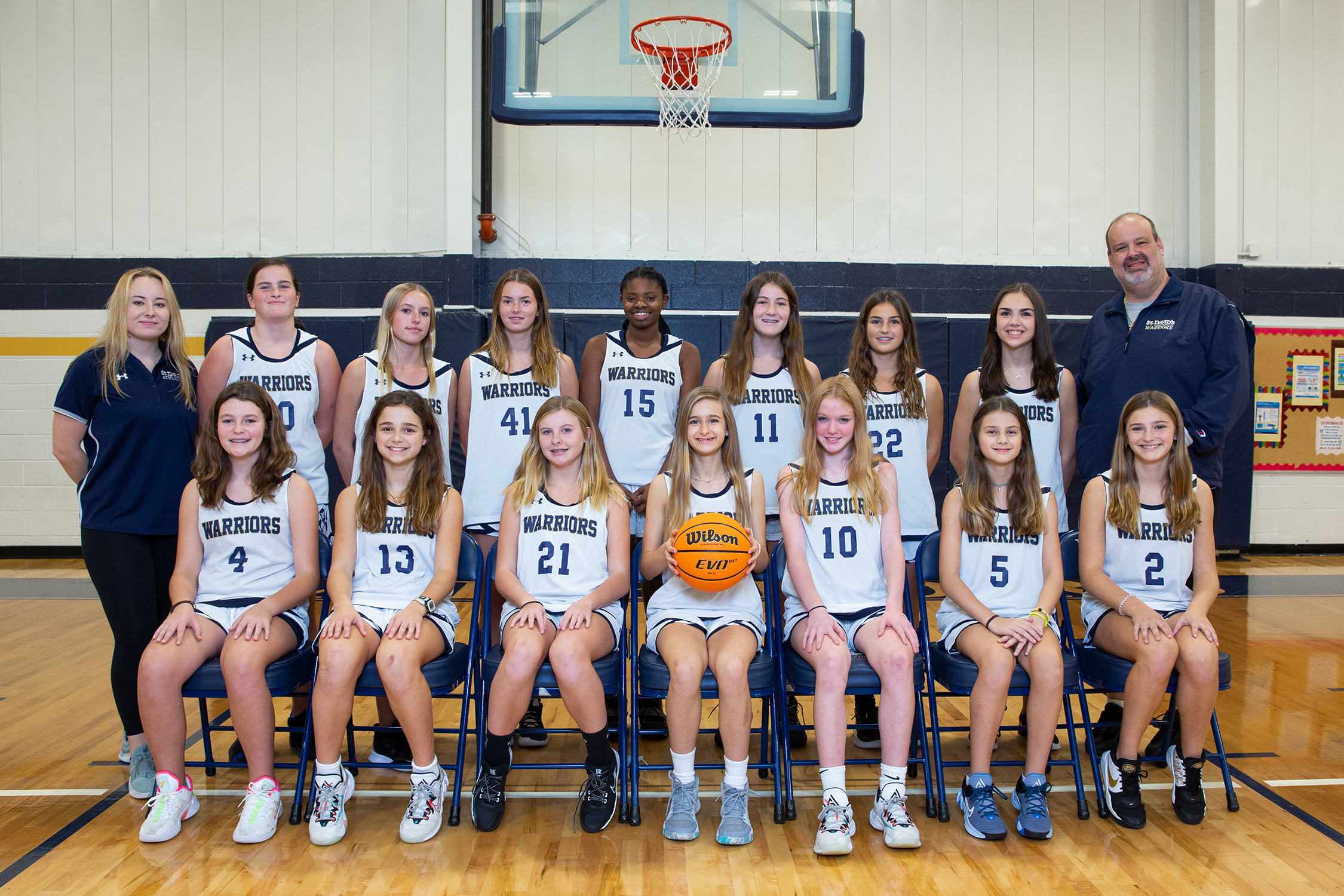 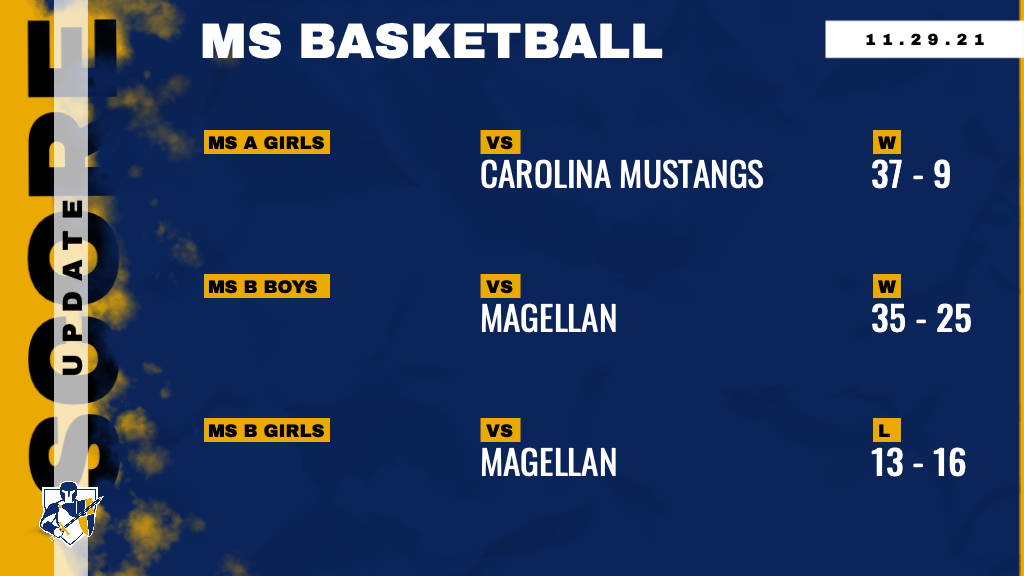 The MS A Girls basketball team played an away game at Ridgecrest Baptist Church against the Carolina Mustangs on December 2nd. They came away with an emphatic 37-9 victory on the heels of great defense and a total team effort with all players on the court at some point during the game. Leading scorers Kate Benson with 10 points and Anna Hauser with 11 points lead the team offensively. Miyah Wright had 11 rebounds to go with her 3 steals and blocked a shot set the tone defensively.

The MS B Boys basketball team played Magellan on Friday, December 3rd at home and bounced back after a previous loss to get a convincing win over their opponent with a final score of 35-25. The Warriors lead by 22 with 4 minutes left in the game but Magellan went on an 8-0 run to close the gap and make things interesting and exciting. The Warriors responded by putting the pressure on them in defense which made the difference throughout the game. They go good offensive production from Patrick Clegg who scored 10 points and Thomas Becker who scored 8 points.

The MS B Girls Basketball team played Magellan on Friday, December 3rd at home and put up a great fight that ended in a close loss. They were up 2 at halftime after some scrappy defense and brave shots going in from our girls. But in the third quarter, Magellan made a strong run to grab a 6-point lead. Despite a great effort to fight back the Lady Warriors couldn't quite close the gap before the time ran out and they lost by 3 with a final score of 13-16. "I'm really proud of the way the girls fought", said Coach Redmond, "they played great!"

MS A Girls basketball opened the winter sports season for the Warriors playing The O’Neal School on Tuesday, November 16th at home. A very good previous conference champion opponent with many returning starters, the game was a grinder. The game left coaches and fans encouraged by the girls’ effort and relentlessness despite the 10-36 loss. Offensively led by Anna Hauser with 14 rebounds and 4 points the team kept up their competitive spirits with the help of defense energy of Avery Black, Julia Painter and Lula Seagraves. “The way our ladies played tonight was not truly represented by the score and I am excited for them as we learn to play this game and play with chemistry,” Coach Eastmann added.

The MS A boys crew opened the winter sports season alongside the MS A girls team on November 16thagainst The O’Neal School with an exciting win. Their immediate defensive energy and execution certainly led to the W and the team put forth great effort to start the season. Sixth grader Henry Morisey led all scorers with 11 points and Wesley Hilldale and Leighton Little each had 8 points on the board. Coach Coley added that the team was “scrappy on defense which lead to quick buckets on offense.”

MS A girls saw their second game of the week against New life Camp on Friday November 19th. They came away with an impressive win and a tone-setting game to close the first week of their season. Coach Eastmann recapped the game well by reporting back that the team was spot on and had great energy. He said, “leading us tonight with a calm but aggressive tone on both ends of the floor was our captain, Kate Benson, who scored 16 points to go along with her 8 steals.  The steals were most impressive as our defense tonight looked more like it should with other players jumping in on the robbery like Lula Segrave who created havoc all over the floor on defense, Anna Hauser with her always quick hands and great play by Margaret Ellerbe.  We also did a much better job on the "glass" getting rebounds with Miyah Wright and Kackie Koon dominating on both ends of the floor for rebounds. Proud of all of our ladies as they are growing before our eyes. Just an absolutely great night to turn the ship in a more positive direction that we can build on for the season.”

The MS A Boys saw more action in their second game of the season and week against New Life Camp on Friday, November 19th. The team played very well in the first half and gelled niced together on the team in both offense and defense. Wesley Hilldale came out hot scoring 11 points in the first quarter and setting the tone nicely ending the game as a leading scoring with 15 points. Leighton little chipped in 12 points while Nico Janas and Oren Cline each had 10 points. Coach Coley added that “even scoring was all around and the defense was stout and active causing many steals and turnovers. Great game all around.”

MS B Girls basketball opened their season playing Cary Christian on Friday November 19th. The girls took an incredible step forward in their first competition after putting in just a week of practice. The work in the practice had the girls looking really great but fell to an experienced opponent 10-28. The energy for the team was palpable on the court and it was evident that they started the season strong with effort and enthusiasm. The girls were down by double digits at halftime but played very aggressive in the second half. “I’m proud of the girls for their efforts and saw so much growth from all those practices we had”, says Coach Redmond.

The MS B Boys team played their first competition of the season on Friday, November 19th against Cary Christian. They started off slow but kept the game in reach in the first half. After making a strong 3rd quarter run, the Warriors went cold with shooting and the Knights pulled away making key free throws and lay ups with 4 mins remaining in the 4th quarter. “This is a fairly new team with 6th graders so my job is to teach them how to win. That’s my job as a coach. We will get better as the season progresses, and I’m excited to see how they grow as a team. I was proud of their work.” Coach Keji Dickerson said.