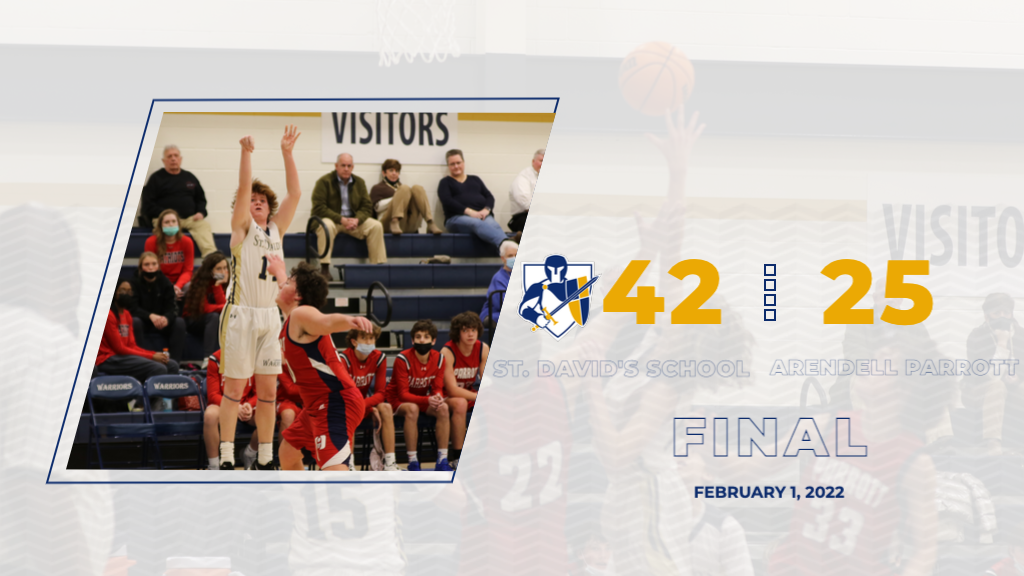 The JV Boys hosted Arendell Parrott on Tuesday, February 2nd in their last home conference game. As the team took the court it was a bit of a slow start but after a few shots dropped the team got things rolling. On the heels of a win in their last game the team has learned how to fire on all cylinders. With contributions from the entire team, ten of the twelve rostered played put up points against the Patriots. The team fed off the great energy of the large supportive crowd and worked their defense to hold Parrott to 22 points at the first half and to only 3 points in the second half. Coach Boone added that his team "played really well. It was probably our most complete game of the year. I'm really proud of how they worked and played." The team finished off Parrott with a final score of 42-25. The boys will take the court again on Thursday, February 3rd against the Carolina Mustangs.

On Friday, January 14th after a drought of games due to cancellations for the last ten days the JV boys hit the court at home against Cary Christian ready to battle. The team was slow to start getting their rhythm only after the first quarter. It was a hard fought win with the teams going back and forth in forced defensive turnovers and patient scoring opportunities. Bilderback lead the team in scoring putting up 15 points and adding 9 rebounds to their defensive efforts. Sink chipped in with 14 points. "Everyone contributed" said Coach Anthony Boone of his team who added that he was "proud that they clawed their way to a win." The team plays again at home on Tuesday, January 18th against Friendship Christian School at 4:15pm. Come support them to another victory!

The JV Boys traveled to Cary Academy on Friday, December 17th and fell short of a win after digging themselves into a hole that was a struggle to get out of. The Charges came on strong scoring early and putting defensive pressure on the Warriors which forced some untimely giveaways. The opponent made it tough for them and continued to score while the Warriors fought to keep up. Will Sink lead the team with 11 points, Bilderback added 10 points and 10 rebounds and McMahon and Shaw each had strong games adding 9 points each in the loss. The final score was 54-43. Coach Boone said of his team that he was "proud of the way we fought back despite the loss." They play again on Monday, December 20th at the Christmas Tournament held at St. David's School. 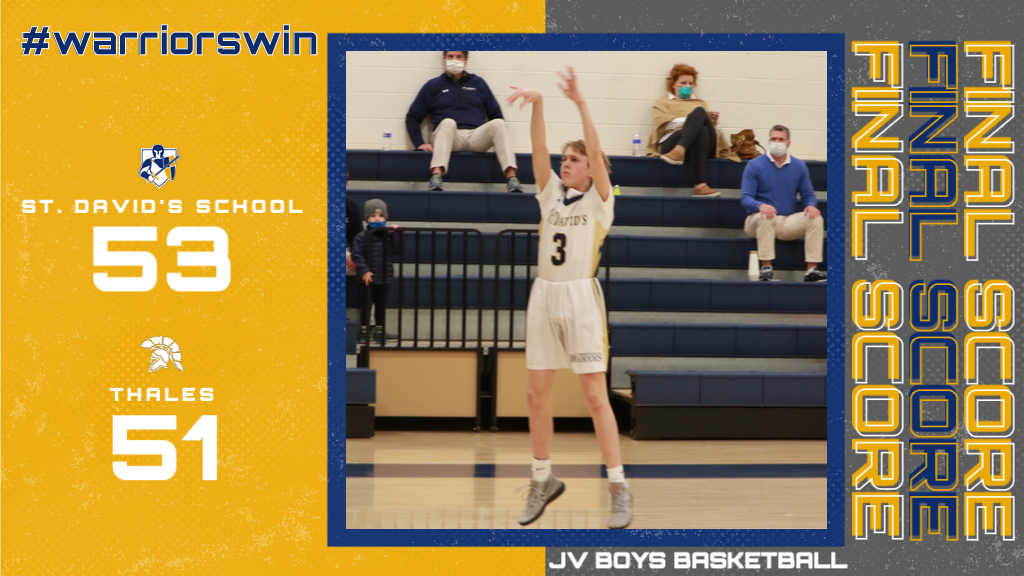 JV Boys basketball played Thales on Wednesday, December 15th at home taking on the Rolesville team in another tough on court fight. The team started strong with scrappy defense and selfless offense putting points up on the board early. Thales kept the fight tight but being ahead late, the Warriors, held on with the help of their high scorers, Will Sink, who put up 22 and Layton Bilderback who contributed 15 points and matched it with an impressive 15 rebounds. The team came out victorious with a final score of 53-51. "This is the kind of game we might have lost earlier in the season", said Coach Anthony Boone, "but we are learning from earlier close games and were able to close this one our with great play." The boys play again, Friday, December 17th at Cary Academy before heading on Christmas break. Come support our Warriors if you can! 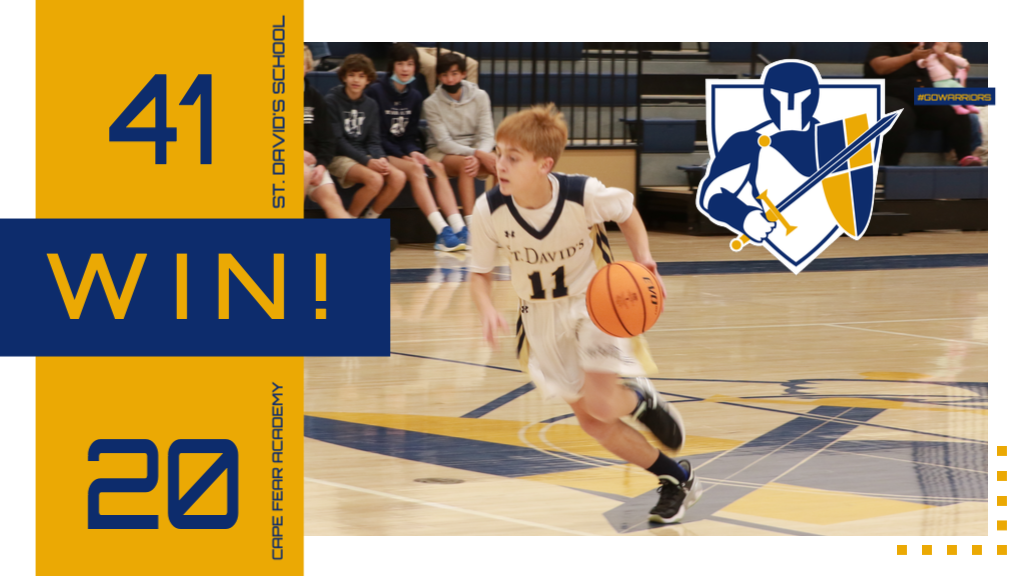 The JV Boys basketball team traveled to Wilmington on Friday, December 3rd to play Cape Fear Academy in their fifth game of the season. They took to the court and got off to a slow start allowing Cape Fear to post strings of points without answers. But after a small half-time deficit and encouragement in the break, the team turned around their performance to battle with the opponent and gain steam through the third and fourth quarter. The strong finish lead them to their first victory of the season with a final score of 41-20 in their away game this past weekend. Freshman Will Sink lead the team with 19 points and the group contributed some "really great defense" said Coach Boone.

The boys took on their next opponent, Freedom Christian Academy, at home on Tuesday December 7th with a sparse crowd and a talented opponent facing them. After playing so well in Wilmington, the team was disappointed to come out without the same energy they left on the court over the weekend. They started with the same slow beginning as their last competition but never had the chance to catch up to an overwhelming and advanced offense from Freedom Christian. Without their normal energy they put themselves in a big hole that they never got a chance to climb out of. The loss ended with a final score of 44-70. The Warriors will be back at it on December 10th at home in a Christmas Sweater themed game on Friday. Please come out to support our Warriors if you can!

The JV Boys Basketball team hit the court again after a long but restful Thanksgiving break when they played an away match at Wake Christian Academy against the Bulldogs. They took their second tight loss in overtime this season which hits hard as a stinging loss but speaks volumes to the effort, relentless competitive spirit and grit the team has. The team should "feel proud of their work" said Coach Anthony Boone who mentioned he can't wait to see them back on the court after this tight game. Sink led the team in scoring putting up 15 points and Chesson, in his first game back off the injury reserve, gave the team a huge boost with 11 points. Crowder lead the team with impressive defense effort and took 11 rebounds off the boards. Stickney was a big contribution on defense with his energy and the team stayed scrappy through the end. The Warriors take on Cape Fear Academy today, December 1st, at 4pm in another of a string of away matches on the calendar. Let's Go Warriors!

The JV Boys took on Ravenscroft on Tuesday, November 23rd in tough back and forth game that was hard fought by our Warriors. Their opponent was seasoned and kept the pressure on St. David's. Though the game didn't fall our way the team is seeing a lot of improvement with each game and practice and promises better competitions to come. Sophomore Layton Bliderback led us with 10 points and 13 rebounds. Davis Crowder, another sophomore put up 9 points and Freshman Will Sink posted 7. "We played really good defense but had too many turnovers. Once we clean that up I feel like we're gonna turn a corner," said Coach Boone about his team. They will return after Thanksgiving break to resume their competition schedule in an away game at Wake Christian Academy on Tuesday, November 30th at 4pm.

The JV Boys Basketball team took on Trinity Academy on Friday, November 19th in a packed home crowd who were cheering on their Warriors in a Beach theme for the crowd. Their energy helped the Warriors stay neck and neck against a strong opponent in the Tigers. The boys showed great improvement from their last game just two days prior and the their efforts showed on the scoreboard. With a tight game the team went back and forth and closed the regular time with a tie. In overtime the Warriors stayed strong in both defense and offense and closed out the game in a close 36-39 loss. Will Sink and Davis Crowder lead the team in points posting 12 and 11 points respectively. Coach Boone said of his team that he was "proud of their efforts and they look forward to getting back on the court for more competition again soon." The Warriors play Ravenscroft on Tuesday November 23rd in an away game. Come support the team if you can!

In their first home match of the season, the JV Boys Basketball team fell to The O'Neal School on Wednesday, November 17th after a hard fought game. The team came out strong and continued to play hard to the end but the Falcons bested our boys with stronger play and capitalizing on some missed defensive opportunities by the Warriors. The final score was 31-61 but Coach Anthony Boone said that his team "played really hard tonight" and that he is looking forward to the next match up they will have tomorrow. The boys should be proud that they started out well but just failed to execute the way they had hoped. They will be back at it November 19th at home against Trinity Academy at 5:30pm where fans and students will join in a Somewhere on the Beach theme.