No players were found for this team
Varsity Teams Travel to Arendell Parrott
Katherine Koslowsky
Mar 31 2022 11:03 AM

Some of our spring Varsity teams traveled to Arendell Parrott and played the Patriots on Wednesday, March 30th. Here are their updates:

The Warriors faced a challenge against Arendell Parrott Academy. It was a long drive and one of the opponents players is a talented, very, high-ranked player in the state. The matches were grinds but Lucas Pisciotto had the longest match almost spanning 2 hours. He ended up winning as did Tom Deloche and Walker Coley with impressive wins and hard-fought plays. Tom Deloche won in the 4th position in a gritty tiebreaker. Lucas Pisciotto and Craig Sanguily had a tough doubles match, along with David Simpson and Owen Urban, who both lost. Tom Deloche and Alex Barroso won their doubles. "Overall we played a great match against some really top players and held on where we could. The boys did really well", said head coach Josh Seglison. The final game score was 4-5. The Warriors next match is on Tuesday at home against Cary Christian, come support the Warriors!

The girls soccer game against the Patriots was their "best game so far and played really well", said head coach Jose Cornejo. The game finished with an 0-2 loss but watching the play was really encouraging to all and showed a lot of progress and connections. The improvements this team is making is evident in games like these. "The girls are working so hard", Cornejo said. They will return to the field next week on April 5th at home vs. Cary Christian.

The baseball team took on a tough Patriot group and were downed 1-12. Junior Preston Cheek started the game on the mound and "threw very well for his first outing of the season", said head coach Joe Lebeda. Davis Crowder came in later and pitched very well also for two innings. "The group played with great energy even when things weren't going as planned", added Lebeda. They play again on Tuesday, April 5th at home against Cary Christian. Please come support our Warriors if you can!

Many varsity teams played on Monday, March 28th. Here are their updates:

It was a tough outing for the girls soccer team who traveled to Ravenscroft and went up against a talented opponent. By halftime the team was down 0-7. With two more goals allowed in the second the game was called by mercy-rule and the team fell 0-9. The group is piecing together different levels of experience and will continued to be challenged but Coach Cornejo is certain the group can stay positive and "keep swinging" in their games.

In their match-up against NRCA on Monday, the varsity boys lacrosse team came up short. Harper Pennington scored 3 goals during the Warrior's game against the Knights leading the team, but his efforts couldn't quite carry his team to victory. Both teams were balanced with young and old players, but NRCA played a more consistent game pressuring the ball and forcing many turnovers on St. David players, many times leading to goals for the Knights. The game had similar tones to last week's game against Cary Academy, where they played hard in the game unable to cash in with goals when they needed them. Captain and senior Clay Matthews played another outstanding game, causing problems to NRCA offensive player along with teammates Henry Koon and Hart Miles. Goalie Jack Burke continues to show great courage in the goal making saves and getting the ball up field. "Lacrosse is a team sport, and like spokes on a wheel, each player plays an integral role for success. We'll continue to work on areas that need attention and good things will happen for these fine young men", said Coach Hink. Also scoring in the game were Clay Matthews, senior middle Nolan Homeister(1 goal & 1 assist), freshman attackman Cooper Berkoff(1 goal & 1 assist) and senior middle John Hauser(1 assist ). They leave for conference opponent Arendell Parrott on Thursday, the 30th for the teams first conference game of the season.

The boys baseball team traveled to Ravenscroft Monday, March 28th where the team started off slowly down by 10 runs in the 5th inning. Admirably, the boys fought back hard with 6 runs in the top half of the fifth inning. Another highlight moment of the game was Luke Nelson who had a hit and an RBI which was a really exceptional play. Despite the loss Coach Lobeda said "he was happy to see success in some smaller moments even though they lost." The team fell 6-16 and is back on the field Wednesday when they travel to Arendell Parrott. 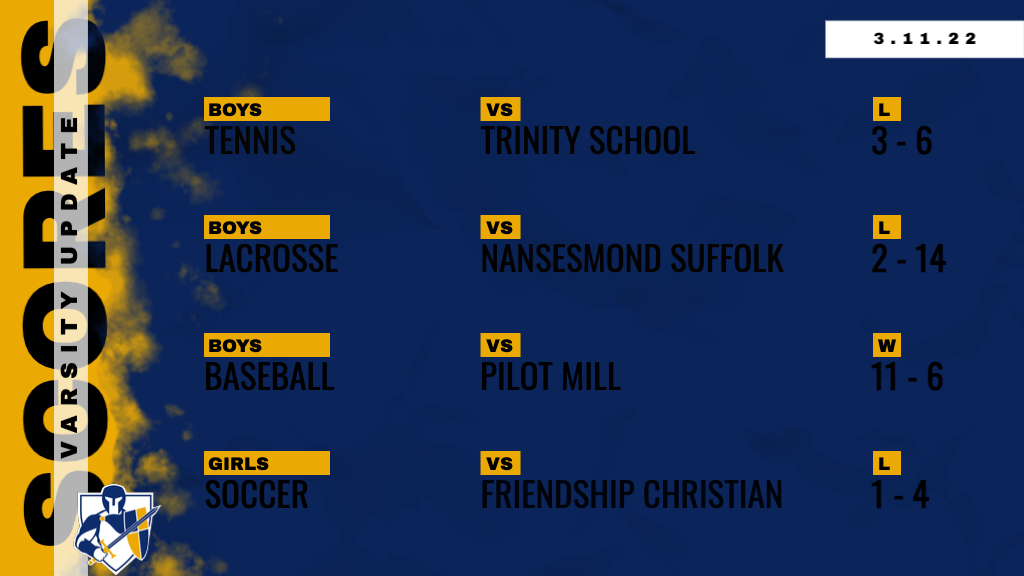 The Warriors were excited to kick of their first Friday evening games in the spring season on March 11th on what turned out to be a glorious day of weather after a wet and cold week with many sports cancellations. All at home on our well-kept fields and court our varsity teams hosted worth opponents for many to open up their 2022 seasons. The varsity boys tennis team made a late add to their calendar and played Trinity School. The boys lacrosse team hosted a very talented Nansemond-Suffolk Academy team on the John A. Murray field. The boys baseball team took on Pilot Mill, a conglomerate team that allows kids who are without school teams of their own to compete. Finally, the girls soccer team kicked off the latest game of Friday's match-ups against Friendship Christian at our satellite complex on Yonkers Road. Here are their updates.

In a home matchup against Trinity, the boys tennis team saw some old friends who previously played at St. Davids. It was a tough matchup, as the team was not full strength without Tom DeLoache or Will Jalkut. The lineup had everyone moved up 1 place so, Alex Barroso was playing first seed, Lucas Pisciotta at second seed, Craig Sanguily at third, Charlie Moses fourth, Walker Coley fifth, and finally Owen Urban playing in the sixth spot. All but Craig Sanguily and Lucas Pisciotta won their singles matches. Craig ended with an easy win with a final score of 6-0 in the first set, and 6-1 in the second set. Lucas won with ease as well, both sets ending 6-0. Everyone else struggled a tough defeat against great opponents. For doubles, Lucas and Craig playing 2nd seed won with an 8-4 score.  Third place doubles suffered a hard loss with a 1-8 final score. The coach said, “I’m pleased with everyone's performance, and although we lost, he was proud of everyone for trying their best.” Overall, it was a tough matchup, and Trinity ended up winning in a close game ending with a 6-3 score. The Warrior’s next game is March 22nd at Raleigh Charter School.

The varsity boys lacrosse team played against an excellent Nanesmond-suffolk school out of Virginia and came up short, losing 14-2. Bright spots of the game though, came from senior face-off middle Davis Wall, who was able to win the majority of possessions. Freshman long stick middle, Walker Tattersail, did an excellent job defending and clearing the ball to the offense. Freshman goalie Jack Burke started his first game and perform very well against a lot offensive power from a highly skilled Saint's offense. The half time score was 6-1, which still felt within reach to the team, but the Saint's offense wore the team down in the second half. Scoring for the warrior's was freshman attack man Cooper Berkoff unassisted along with senior middle Nolan Homeister, also unassisted. The captains for this year - seniors Clay Matthews, Henry Koon, John Hauser and freshman Cooper  Berkoff - lead the group well with a lot of communication and effort. Coach Doug Hink added, that "this was a good learning experience for all, providing many aspects of the game for us to improve on."

The boys varsity baseball team was excited to hit the field and start off their season with good competition in a Pilot Mill team that has different students on their roster from different schools. The team started off early opening up the game with a 3 run home run in the second inning by Leyton Bilderback. Early on there was a great outing by both Bilderback and Grey McMahon pitching. Both Davis Crowder and Grey McMahon also contributed with a couple of timely hits to keep the momentum going and pushing the Warriors to an 11-5 victory over the opponent. It was a "great way to start the season", said head coach Joe Lebeda.

The varsity girls took on a talented opponent and with a mixture of different skill levels on their team are still learning how to put all the pieces together. "This early in the season can always be hard", said Coach Cornejo, "because we haven't had a change to practice much together. But, having said that, there were a lot of encouraging performances by some players and as we get more comfortable with one another this team is going to improve quite a bit. I'm looking forward to the rest of the season." The group fell behind early in the game with the Falcons taking an early lead with the first goal in net. The team lost 1-4 with Kate Weston scoring the teams only goals.

The Warriors traveled to Cary Academy on Friday, December 17th to take on the Chargers on Homecoming night before a near capacity crowd. The Chargers came out with great energy racing to a 17-5 lead in the first quarter.  The Warriors would respond behind a 12 point quarter from Ghalon Chisley and an additional 5 points from Hank Madden to cut the lead to 10 at the half, 32-22. The Chargers ultimately turned up the energy in the third quarter limiting the Warriors to only 5 points in the quarter to take a 49-25 lead going into the fourth. Cary would take the fourth quarter by a score of 19-7 to claim a 68-32 win. The loss dropped the Warriors to 1-9 on the season.Chisley lead the Warriors with 15 points all in the second half. Riley Berkoff had 7 points and Madden added 5 points to the Warrior loss. Coach Coley commented that the team was "out-hustled by Cary Academy tonight. We showed some good things in the second quarter but could not sustain it.  We will continue to look forward and try to learn from this experience." The Warriors will take on Greenfield on Tuesday in the Greenfield Christmas Tournament at St. David's School. Come support the team if you can! 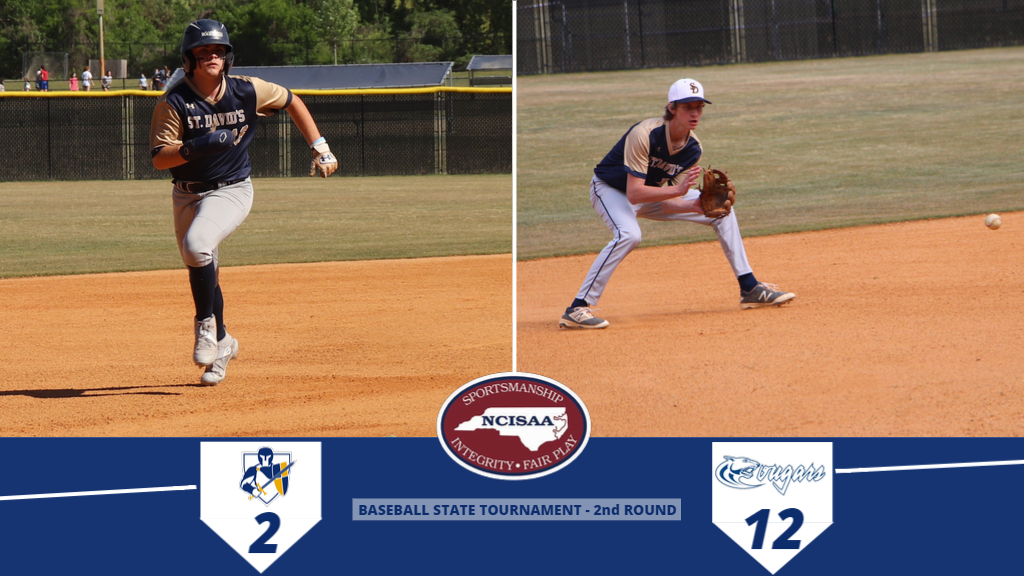 The Warriors traveled out to High Point on Friday to face High Point Christian Academy in the second round of the state playoffs. The Warriors got out in front early with an RBI single by freshman Layton Bilderback that scored junior Luke Fuller. Senior Warren Beard that drove in junior Luke Nelson setting up a two nothing lead early. The Warriors fought hard playing great defense in the field highlighted by a great run down catch by Senior Ford Everett. The High Point offense was just too much for the Warriors though as they took the lead in the third and never gave it up. The Warriors fought throughout the game making High Point fight for their win. The Warriors lost by a score of 2-12. Head Coach Joe Lebeda came into the huddle after the game and talked about how much he appreciated the team, the seniors and the season. Assistant Coach Alan Hinnant also emphasized these points showing the bond of the team. The Warriors thank the seniors for their time and dedication to the program and look towards next year and to build off the positive momentum from this season.