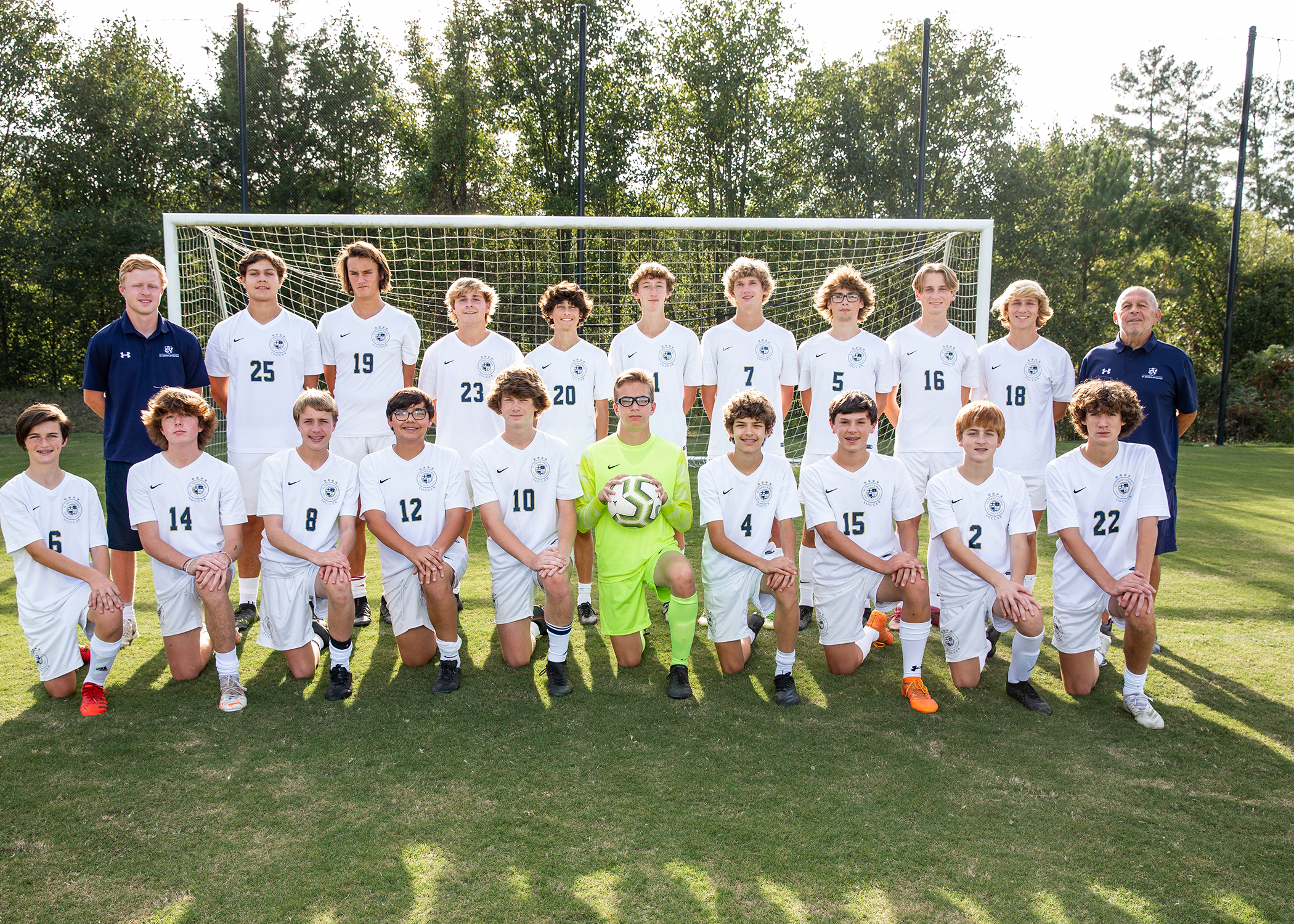 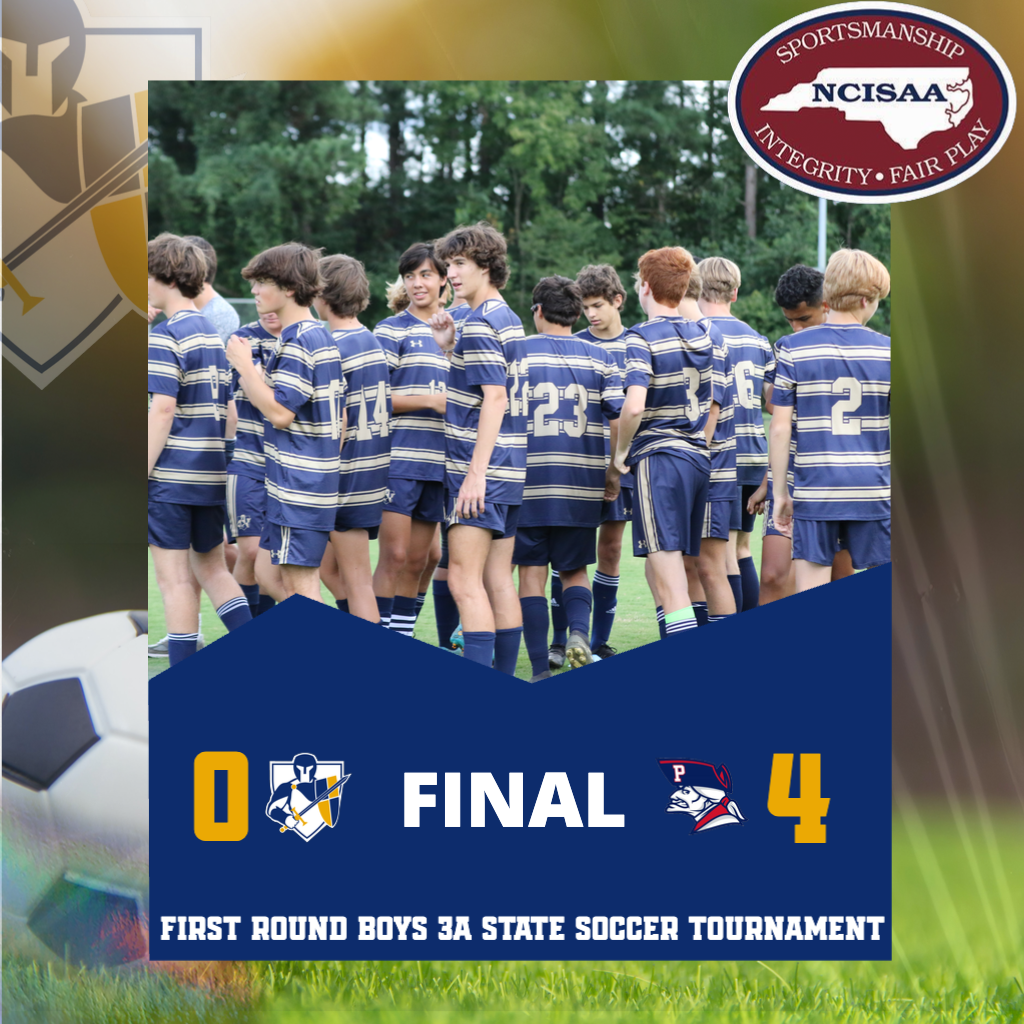 Our Varsity Boys Soccer Team traveled down to Arendell Parrott Academy to take on the Patriots in their opening round of the 3A State Tournament on Tuesday, October 18th.  The weather was not favorable for soccer but the Warriors were determined to put forth their best effort.  The match got off to a slow start with both teams trying to get warmed up.  The Patriots were able to get on the score board first and continued to maintain control of the game throughout the match.  The Warriors had a few opportunities to score but could not capitalize on them.  "The guys fought hard but tonight just wasn't our night," said Coach Cornejo.  "I'm proud of the effort our guys gave all season," added Coach Cornejo.  The Athletic Department would like to say thank you to the Varsity Boys Soccer Team and Coaches for your hard work and dedication this season! 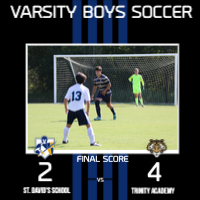 The Varsity Boys Soccer Team hosted Trinity Academy on Tuesday, October 11th.  It was Senior Night for the Warriors and they were excited to be back in action following the Fall Break.  The Warriors started the game strong by being competitive on every play. The Warriors controlled the score first with two goals, one by Carter Moran and the other by Fabian Fallas Retana.  Trinity Academy fought back and scored a goal of their own leaving the Warriors with a 2-1 lead going into the half.  The Warriors came out a little flat in the second half which gave the Lions room to capitalize and they did just that by scoring another goal to even the score 2-2.  The Warriors continued to fight and make hustle plays but could not break the momentum of Trinity.  The Lions score 2 more goals to close out the game.  We would like to give a huge THANK YOU to our Seniors Lucas Pisciotta and Sebastian Casas for their years of dedication and service to the Varsity Boys Soccer Team! 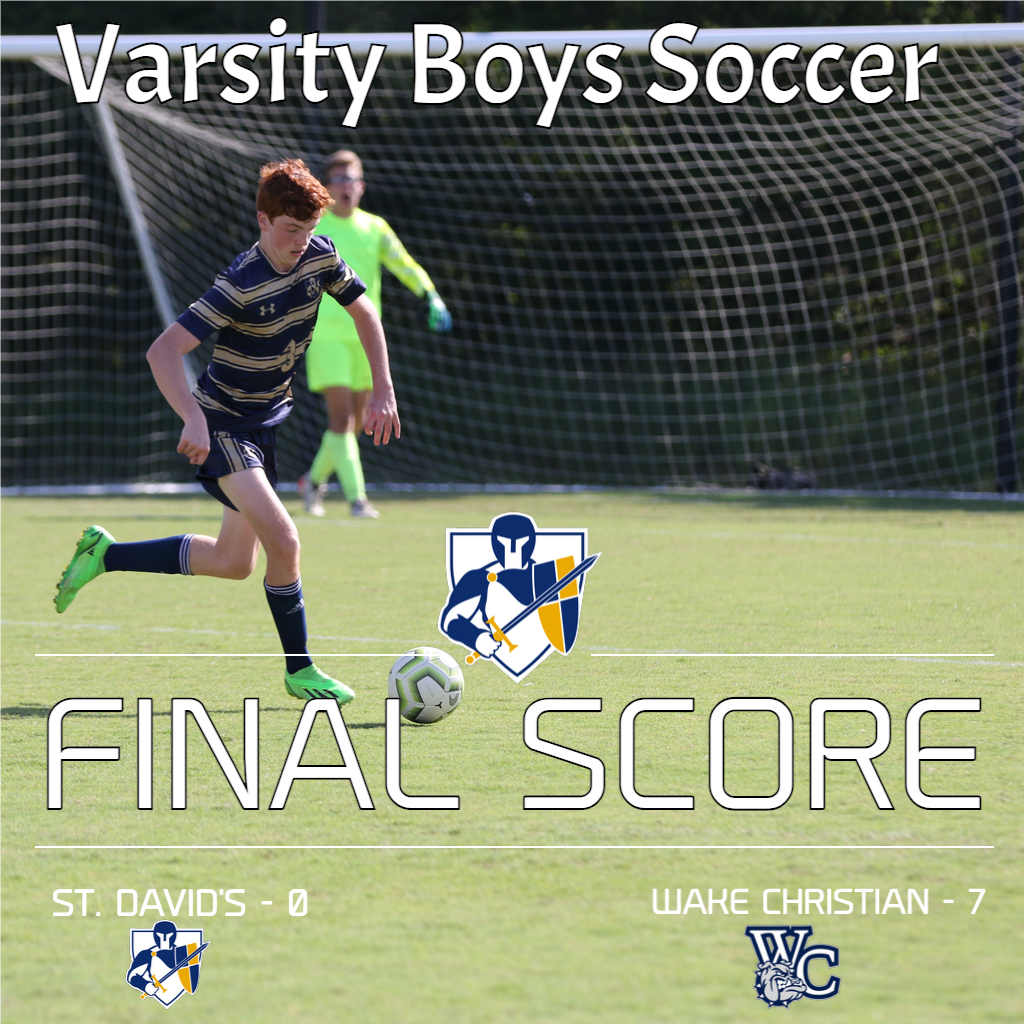 Our Varsity Boys Soccer Team traveled to Wake Christian on Friday, September 23rd for a repeat matchup against the Bulldogs.  The Warriors entered the contest still down multiple players do to injury but the boys fought hard throughout the game.  Coach Cornejo had to go to his reserves to look for a spark.   Austin Hernandez came off the bench and gave the Warriors some energy but it was not enough.  "We can use this game as a learning tool as we finish up the regular season and start to focus on the state playoffs, stated Coach Sewell.  The Warriors will be in action again on Thursday, September 29th as they go on the road to face Grace Christian at 4pm. 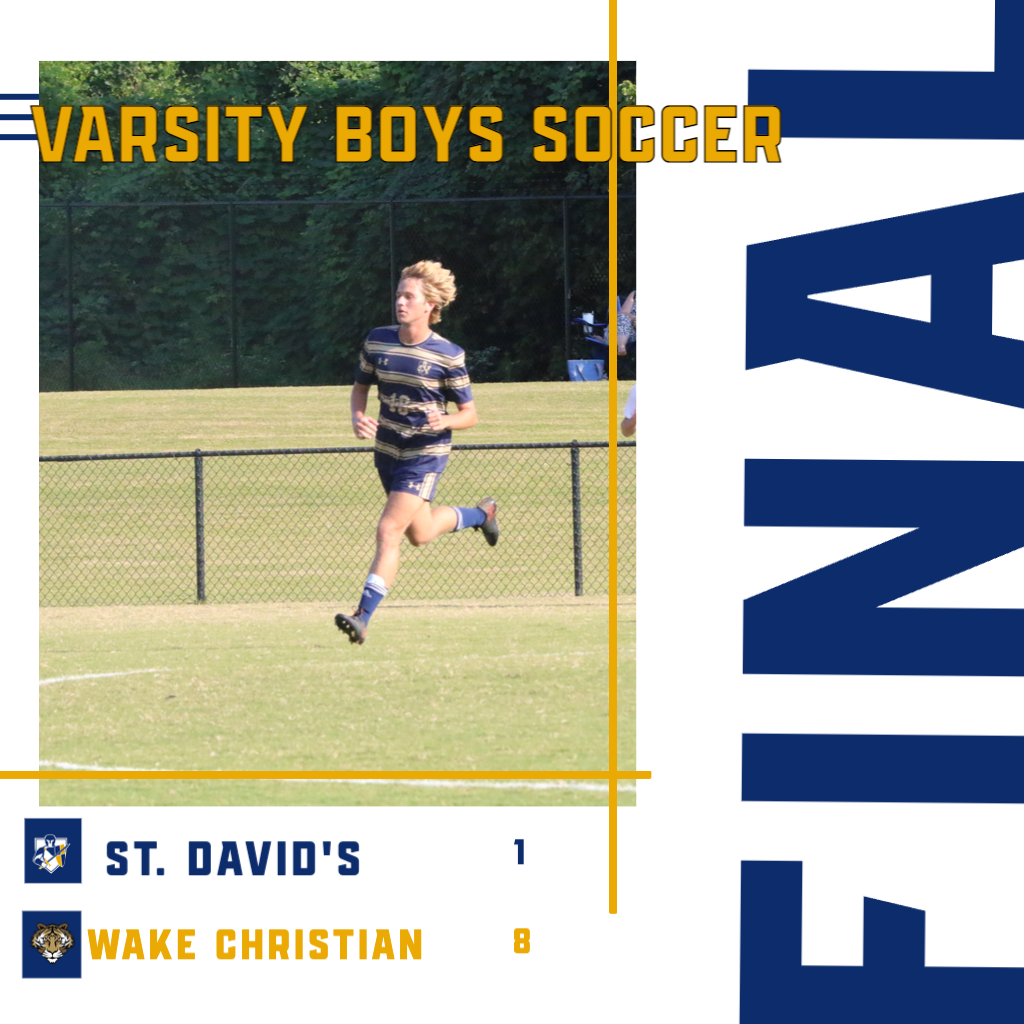 Our Varsity Boys Soccer Team competed against Wake Christian Academy at home on Tuesday, September 20th.  The Warriors entered Tuesday's competition at a slight disadvantage due to the fact they were missing several key players.  "We knew this game would be tough because we didn't have our entire team.  We tell our guys everyday to be ready for their moment," said Coach Cornejo.  The Warriors had to move some pieces around on the field to try to combat the attack of the Bulldogs.  Despite the competitive spirit of the Warriors, Wake Christian jumped out to an early 3-0 lead.  The Bulldogs controlled the tempo of the game for most of the evening.  A bright spot for the Warriors was Senior Lucas Pisciotta who scored the only goal for the Warriors and his first goal of the season.  "I was pleased with the way Lucas played today.  He took advantage of his opportunity today," Coach Cornejo stated.  The Warriors will be in action again on Thursday, September 22nd as they travel to Trinity Academy. 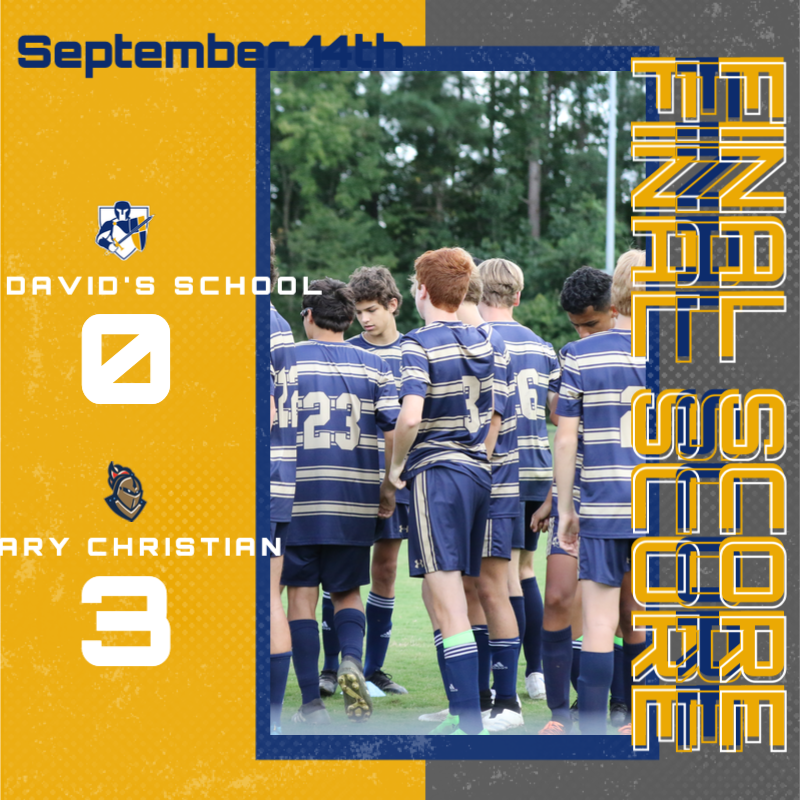 The Varsity Boys Soccer team hosted a tough Cary Christian team on Thursday, September 8th.  The Warriors started the game out tough creating multiple scoring opportunities but could not capitalize on them.  The Warriors goalie, Jack Sena, played a very tough game coming up with multiple stops and deflections to keep the contest under control.  "We made a few costly errors that we will make sure to address and clean up at our next practice", said Coach Cornejo.  The Warriors are back in action for a conference game next Tuesday, September 13th against Grace Christian.

On Tuesday, August 23rd the varsity boys soccer team took on Southwest Wake in a newly added game to their schedule. In the teams first game of the week, and only second of the season they struggled on field against a worthy opponent. Southwest Wake put plenty of pressure on our Warriors who in turn made some mistakes that were capitalized on by the Wolves. The Wolves kept after them who turned much of the momentum in their favor ending the match in a 1-5 loss for the Warriors. Coach Cornejo summed up the loss succinctly by saying "it was good that we were able to get the whole team out there and everyone had an opportunity to play but we have work to do. I think the boys are up for it. We will work hard to get them there." Their lone goal was scored by sophomore Will Sink. It's a quick turnaround for the Warriors who will be back on the field tomorrow, August 25th against Arendell Parrott at home. Please come support our Warriors in another hunt for a victory.

In the second round of playoffs the Warriors played Grace Christian in an away match on October 21st. The soccer team had split with them during the year and the team went in to the game feeling good about the chances having competed with them during the season in really tight, well-played, exciting matches. Early on in the first half the Eagles put a goal in the back of the net that the defense couldn't stop. It felt like catch-up from there for the team that tried to claw their way back but at half-time was down 3-1. The team returned from the half ready to compete and they started to fight back with good defensive fights on the ball and stronger possessions but when Grace Christian got another goal the team was just not able to pull it off. The final score was 6-1 to close the 2021 soccer season. Coach Cornejo said of his team, "I am proud of the boys as we always gave our best, I am thankful to our seniors for their contribution to St. David's soccer."

The Warriors took on New Life Camp and fought hard on Monday, October 11th having one of the most intense finishes of the season. The Warriors were down at halftime and the Storm scored another goal quickly making it 2-3 but, the Warriors responded with one of their own and with just seconds on the clock Alex Weaver made an amazing goal to finish off with a hat trick for his senior night. Two of those assists also came from Senior Hank Madden. As the game was non-conference the final result was a 3-3 tie but the Warriors, riding momentum, decided to challenge the opponents to a ten minute overtime. The Storm accepted and scored another goal, a heartbreaking loss on senior night. Coach Cornejo who talked with the parents after the game and honored the seniors who had been such an important part of the team said, "it was not the desired result but the team fought hard and must prepare for an away game coming next Tuesday, October19th to start the State playoffs." He added, "we had a really nice crowd for Senior Day celebrating the contributions that Alex Weaver, Hank Madden, Alex Barroso, Harper Pennington and Andy Retana have made to our program over the last few years.

The Varsity Warriors played well Thursday but in the end were defeated by the Patriots of Arendell Parrot Academy on September 16th. The Warriors, having made big improvements in the past week, passed well, had much better ball control and had excellent goal scoring opportunities but in the end were not able to convert these into points on the board. The Patriots, led on by a strong second half and impressive talent in the opposition, defeated the Warriors 5-0. Coach Cornejo told the players to keep their heads up as there were many positive things and lots of things to learn from the game. The boys take to the field again in a home match on September 21st against Cary Christian. Come out to support our Warriors!

The Warriors played against Cary Christian in a competitive away game on September 8th. The match-up was an excellent test to boys' progress through this early part of the season and they rose to the occasion with clean possession, aggressive defense and thorough communication. Coach Cornejo said of his team, "it was probably our best game yet this year. We Were communicating and connecting passes. We played as a unit and even though we lost there were a lot of positive moments that we hope to build on." Hank Madden scored with an assist from Will Sink leaving the score a 5-1 loss. The scoreboard doesn't quite reflect the game or the Warrior's effort in this match-up. The boys will compete again at Durham Academy on September 14th.

The Warriors lost in an away match to Trinity Academy on September 7th. The boys continue to piece together bits of improvement along the way but Trinity put too much pressure on the team and they struggled to recover. The pressure forced errors and limited possession for the team as they seemed to be playing well one moment but the next making mistakes. Coach Cornejo emphasized the importance of communication "as it is crucial to team development", he said. In this game, Alex Weaver scored 2 goals, Hank Madden scored the other with assists from Alex Barroso and Hank Madden.

Varsity boys soccer played against Ravenscroft on August 31st at home. The Warriors hung with the Ravens in a 1-1 game for the first twenty minutes of the game until the boys took some hits that resulted in minor injuries for a few players. After some shaking off and adjusting the team could never quite recover from those challenges. Injuries forced players to play in positions they aren't usually in and those substitutions seemed just a bit too far outside the Warriors' comfort zone. The heat and skipping a day of practice surely didn't help matters but "the boys will regroup and continue to press onward to their next competition" Coach Cornejo said, when they play an away game against Fayetteville Christian Academy on September 2nd.

Varsity boys soccer took the field Friday, August 27th to take on Rocky Mount at home. They showed poise and control as they played demonstrating real improvement from their last competition against Cary Academy. "Collectively", Coach Cornejo said, "we moved really well and our communication was the best so far this year". They started out strong, passing well and moving as a unit throughout the first half. Goal scorers included Lucas Pisciotta, Sebastian Casas, Hank Madden, who also delivered an assist, and Alex Weaver, who notched 4 of the Warriors' 7 goals. The Warriors take on Ravenscroft at home on Tuesday the 31st next.