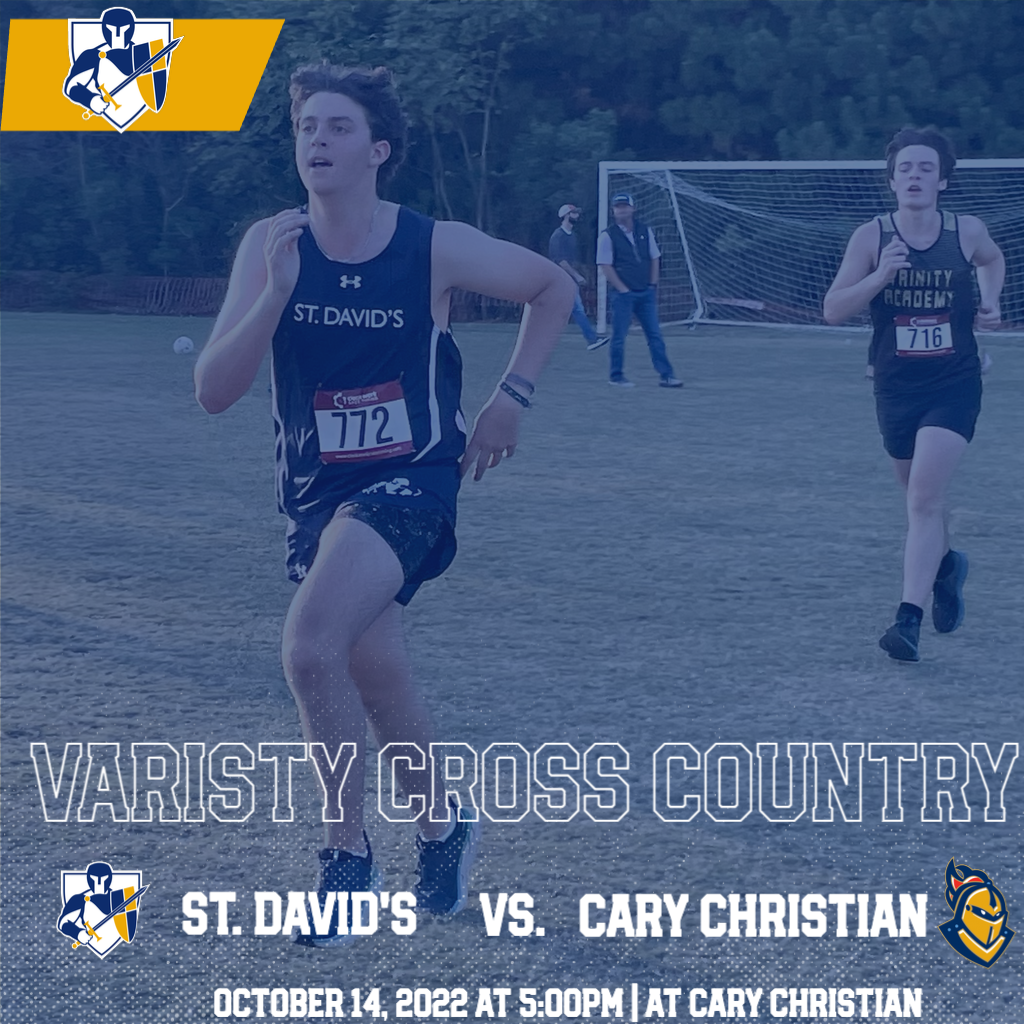 Our Varsity Cross Country Team traveled to Cary Christian on Friday, October 14th to take on the Knights.  The start time was 5:00pm and the Warriors were eager to enter their 2nd meet since returning from Fall Break.  It was a tough field of competition but the Warriors were focused and ready to battle the entire 5,000 meters of the race. The host team was compiled of some very strong runners which was evident by Cary Christian finishing in the first 6 spots of the leader board.  The top performer for our Warriors was Will Fox who finished with a time of 22:34.6.  "Our team competes in every meet no matter the competition.  I am proud of all of their efforts." - Coach Grosh

St. David’s Cross Country team took part in their final race before states. The event took part at Fred G. Bond park and was against Heritage Academy and Fletcher Academy. The run consisted of a shorter, 2.9 Mile loop, with lots of shade and small hills. The sudden chillier fall weather made the run easier and helped the runners stay cool.

The boys and girls all ran at the same time and junior Laura Martin Placed first among the girls. For the boys team, Senior Luke Fuller took the lead for St. David’s, followed by Senior Will Patrick, Junior Jack Wells, Junior Jackson Rouser, and Junior Navin Deol.

The runners that participated in the race for St. David’s are all qualified for states, and they await to see their final roster for the meet in Wilmington on October 29th. The warriors will push hard with the week and a half until then, and are excited to be able to take part in it.

St. David’s Varsity Cross Country had their first home meet at Wendell Park with Grace Christian and Arendell-Parrot Academy. The course was a hilly, two lap, one-and-a-half-mile long run. The weather outside was at a scorching 90 degrees but most of the course was in shade throughout the woods. The Warriors pushed on through the heat and were able to produce solid results, only a little slower than their last meet, doing their best to work in the rough environment.

The guys race was first and the top 5 placing for St. David’s were Senior Will Patrick, then Senior Luke Fuller, Junior Jackson Rouser, Sophomore Dhru Govindji, and Sophomore Akash Govindji.

The girls running second continued the improvement with solid finishes from a few. Junior Laura Martin lead St. David’s girls, followed by Junior Kailyn Woodall, and Sophomore Ainsley McCoy. St. David’s is still looking to improve their overall scores, but they are continuing to make progress as they run each meet. The varsity team runs again on September 23rd against Ravenscroft.

Like all outdoor fall sports in recent days, the extreme heat and humidity has taken its toll on cross country athletes and their efforts to train well in the early days of the season. Trinity Academy of Raleigh wisely moved Tuesday’s meet to 6:00 PM by which time the temps had dropped from a high of 94 degrees. Under some cloud cover and a slight breeze, the boys race took off at 6:00 PM, followed five minutes later by the girls.

Trinity’s course is a challenging route around their athletic fields, track, and through the adjacent woods, including hills. It is not a typical PR (personal record)-setting course and Tuesday’s race proved to be no different for any of the athletes from the three competing teams. In fact, in the end while announcing the results, Trinity’s coach, Denise Myers, referred to the race as a “tempo run,” that is, a workout where the athletes run at just a bit slower than race pace.

St. David’s athletes were satisfied to complete the course, if not in record time, in record heat!

This week’s results included some shifting in the boy’s top five scorers, including Will Patrick (Senior team captain) finishing in 9th overall and 1st for the Warriors, followed by Judson Thompson, Jack Wells, Jackson Rouser, and Akash Govindji. The girls’ team, although not able to score, were led by team leaders Laura Martin, finishing 3rd overall, followed by Kailyn Woodall and a courageous run by newcomer Ainsley McCoy.

Student writer Kaishun Sato-Choi adds, “we ran strong at the meet and, even with the sweltering temperatures lately, we did not give up. All of us runners were able to finish the race, even with the rough practice conditions we had in the previous week. Our runners placed third and improved their score by double since our last meet. We are looking to improve our progress even more on September 7th.”

The team anticipates the much-needed break in the weather and a chance to build quickly on its tough start to the season at their next meet - a trip to Kinston to take on Parrott Academy!