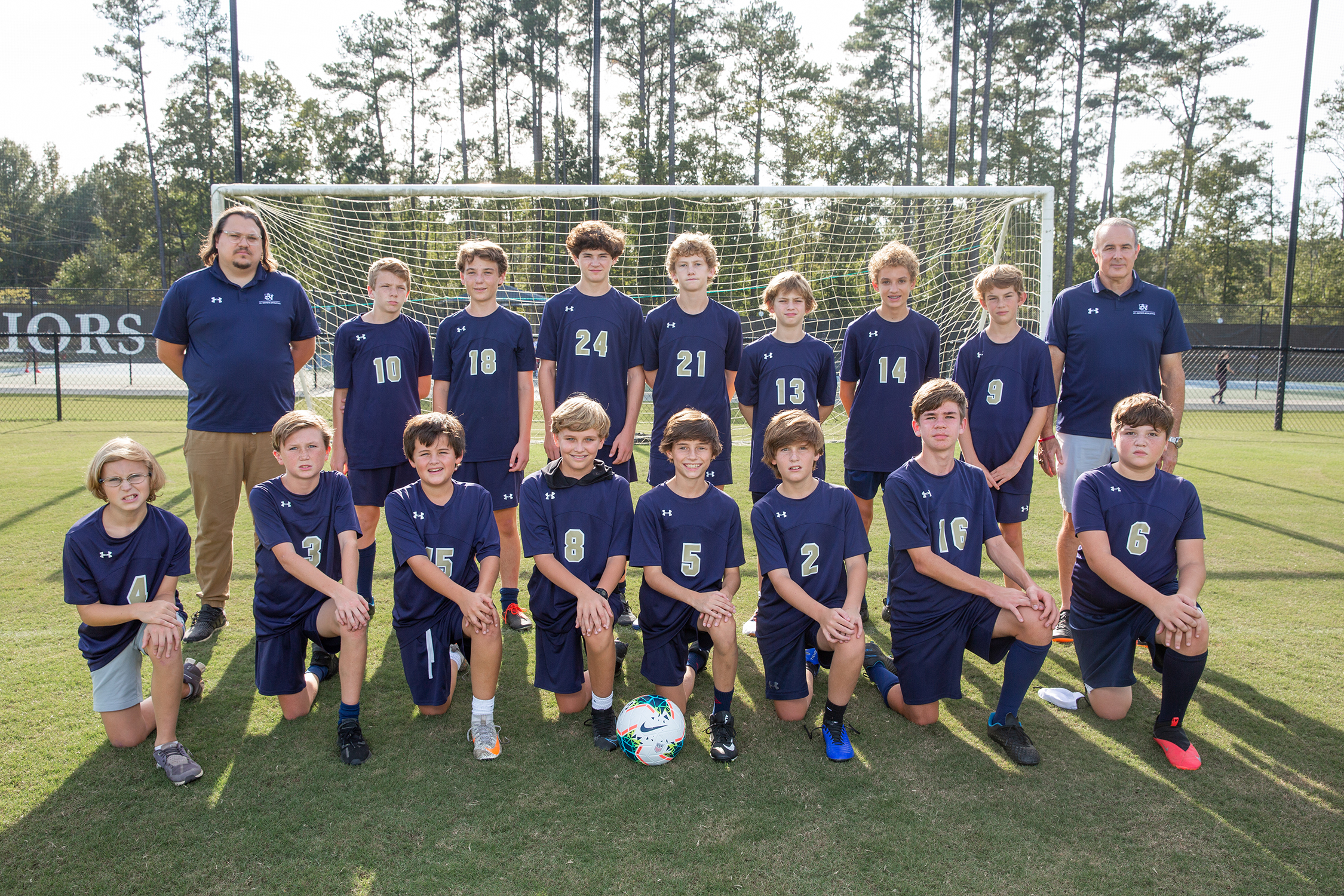 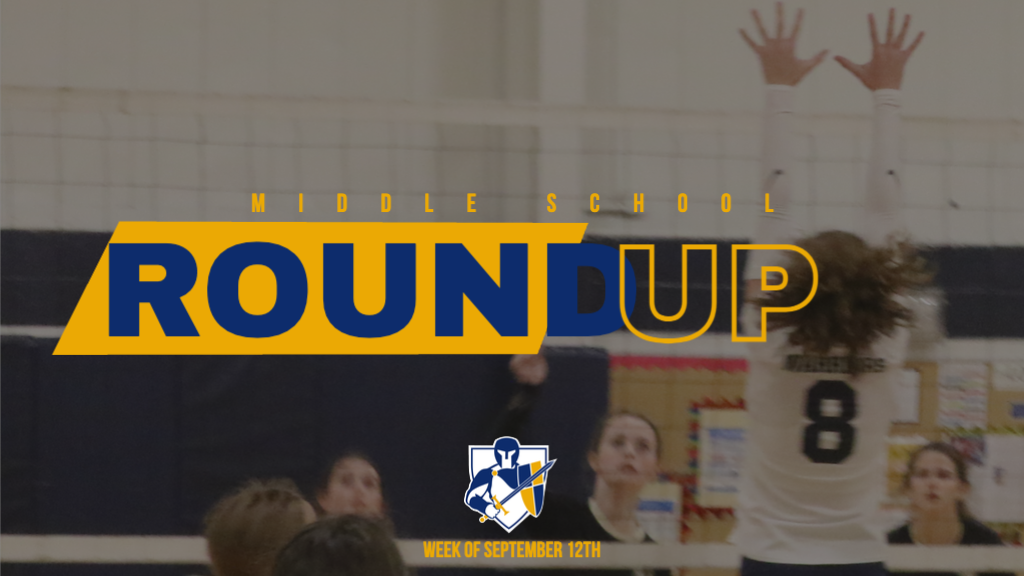 MS ROUND UP WEEK OF SEPT. 12TH

Our MS volleyball team hosted Grace Christian on Tuesday, September 13th.  The Eagles jumped out to an early 3-0 lead in the first match.  The Warriors forced a side-out which put them on the board.  A series of serves by 7th grader Leah Mitchener added to the score for the Warriors.  Grace Christian made a defensive stop and once again took over possession and eventually won the match.  The second match was a closer contest with Leah Mitchener leading the serving charge.  Maya Wadsworth, also a 7th grader, pitched in with some aces of her own.

Our MS Volleyball team faced a tough Trinity Academy team on Thursday, September 15th.  The first set went down to the wire with our Warriors edging out the Tigers with a score of 31-29.  The second set started off close, but Trinity was able to pull away and take the win.  The final set was a nail biter.  There were several long volleys that kept the crowd on its toes.  The Tigers of Trinity Academy eventually won that set as well as the contest.  “I’m so very proud of our girls.  They continue to fight through obstacles and become better teammates everyday,” said Coach Carroll.  The Warriors are in action again on Monday, September 19th against conference opponent Cary Christian.

The MS Boys Soccer team played on Tuesday, September 13th at home versus Grace Christian.  The Warriors were faced with adversity before the game even began due to several players being out sick and having no subs available. The boys remained tough and continued to battle.  Several Warriors had not played a full game but filled and made outstanding plays.  Parham Bratton (8th grade) played well at defense and had an excellent 2nd half shutting down several offensive zone attacks.  Will McClatchey (8th grader) had another stellar outing turning away several shots.  Sam Jenkins played outstanding in central defense and was relentless.  Sam had to come out at one point after taking a hard shot to the face, but he bounced back and continued his work on the back line.  “Even though the score did not go our way, the circumstances forced the boys to contribute in way they had not previously, and they did well.  This experience will serve the boys well the remaining part of this season and in future seasons,” said Coach Walston.

The MS Boys Soccer team play Dash United on Friday, September 16th.  The Warriors were excited about having everyone back from illness and playing a home game on John A. Murray Field.  The Warriors took the field determined to improve upon their previous outing.  The Warriors played great defense and showed tremendous hustle.  As a result of their play the Warriors got on the scoreboard first.  Dash United came back with a goal of their own to set the score at 1-1.  The Warriors moved the ball well and created several scoring opportunities but could not capitalize on them.  Dash United was able to take control and scored two more goals to win the game.  “Our guys played hard despite the challenges of the week.  I am glad to have the complete team back.  We will keep working hard and getting better so our efforts can turn into wins,” stated Coach Walston.

Some of the middle school teams kicked off their fall season with games this week. Here are their updates.

The Middle School girls tennis team took on Endeavor Charter School and picked up right where they left off last year after a championship season in 2021. The strong start for the lady Warriors left them with a 7-2 victory. Anna Hauser held on strong on court two for a 8-5 win over a very good opponent. Doubles did not disappoint serving two of the three courts and putting up impressive controlled play to outlast the Endeavor doubles. The team plays again at Franklin Academy on August 23rd at 4pm. Well done Warriors!

Opening their season on home field the boys MS Soccer team played After a very tight first half, the Warriors were down 0-1, but battled back early in the second half to tie the score at 1-1 with a goal by George Henry Shoaff that he recovered after the goalie fumbled recovery of a previous shot.  Much of the 2nd half was hard fought, but the Warriors ran out of gas and gave up 3 late goals to end the game.  "Will McClatchey was great in goal and turned away several excellent shots. Newcomer to the soccer team, George Henry Shoaff, played well in his first game with the Warriors creating several scoring chances and drawing tight coverage in the second half while Davis Black, 6th grader and newcomer to the soccer team, held his own on the defensive back line and was consistent all game", coach Walston added. The Warriors look to bounce back on August 30th when they welcome Wake Christian for their first conference game. Come support them at 4:15pm.

The Middle School Cross Country team opened their season at the familiar Wake Med Soccer Park competing against Cary Christian and others on Tuesday August 16th. It was a great showing for the team who were able to post great times and compete well against the opposing runners. The girls took 7th place out of 12 teams with Annie Erickson holding a 8:21 min/mile pace. The boys took 5th place out of 12 teams with Charlie Slawinski posting the best time at a 6:01 min/mile pace. The team was also excited to establish their captains for the season; they are Annie Erickson, Henry Carreker, Jake Slawinski, Duke Kimbrell, Liv Hogan, Aubrey Linder, and Jack Phillips. "All these runners have shown above and beyond leadership, sportsmanship, and determination over the past couple of weeks. I, and the team, are very grateful for their spirit and how they represent St. David's", said head coach Lena Olsen. They compete again on Sept 6th at the Wake Med Soccer Park. 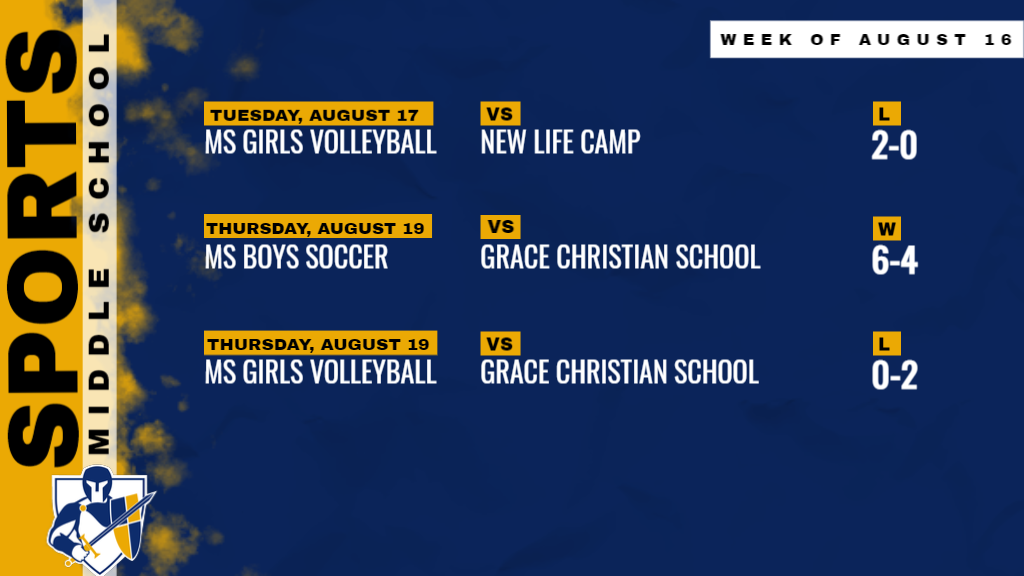 MS Girls Volleyball fell to the New Life Camp team but put up a great fight after only having worked together in two practices. They played a tough first game on the first day of school and were led by their 8th grades Miyah Wright and Mary Elizabeth Martin who put up 3 kills and 6 digs respectively. Seventh grader Elizabeth Seamster pushed for momentum in the second set with 2 aces. Come support our Warriors next week at home on the 24th against Friendship Christian.

The MS Girls played Grace Christian in an away game and experienced a difficult loss against an experienced team. The girls are still learning how to control the ball and make smart on-court decisions through rallies. Addie Howard and Reagan Hales were important subs late in the game who each kept tough serves in the court under pressure. Miyah Wright has 2 kills and Katie France had 4 digs to help push the warriors through a competitive match. The girls will compete again on Tuesday the 24th at home at 4:15pm. Come support our Warriors!

MS Boys Soccer started their season off with am away win against Grace Christian. The team powered through the intense heat to get goals in the net - six of them - three of which came from Oren Cline in a season-opening hat trick. Solid midfield play from Reilly Crosby who scored two goals helped overcome the teams slight struggle to clear balls from their still learning defense. Coach Walston's thoughts after the match were ones of excitement for all the new faces and talent on the team. He is confident that consistency will come as they have more time to practice and develop their skills. "While we have a lot to work on, we have a lot to build on too!" Join us in support of our boys next week at home against Friendship Christian on the 24th.