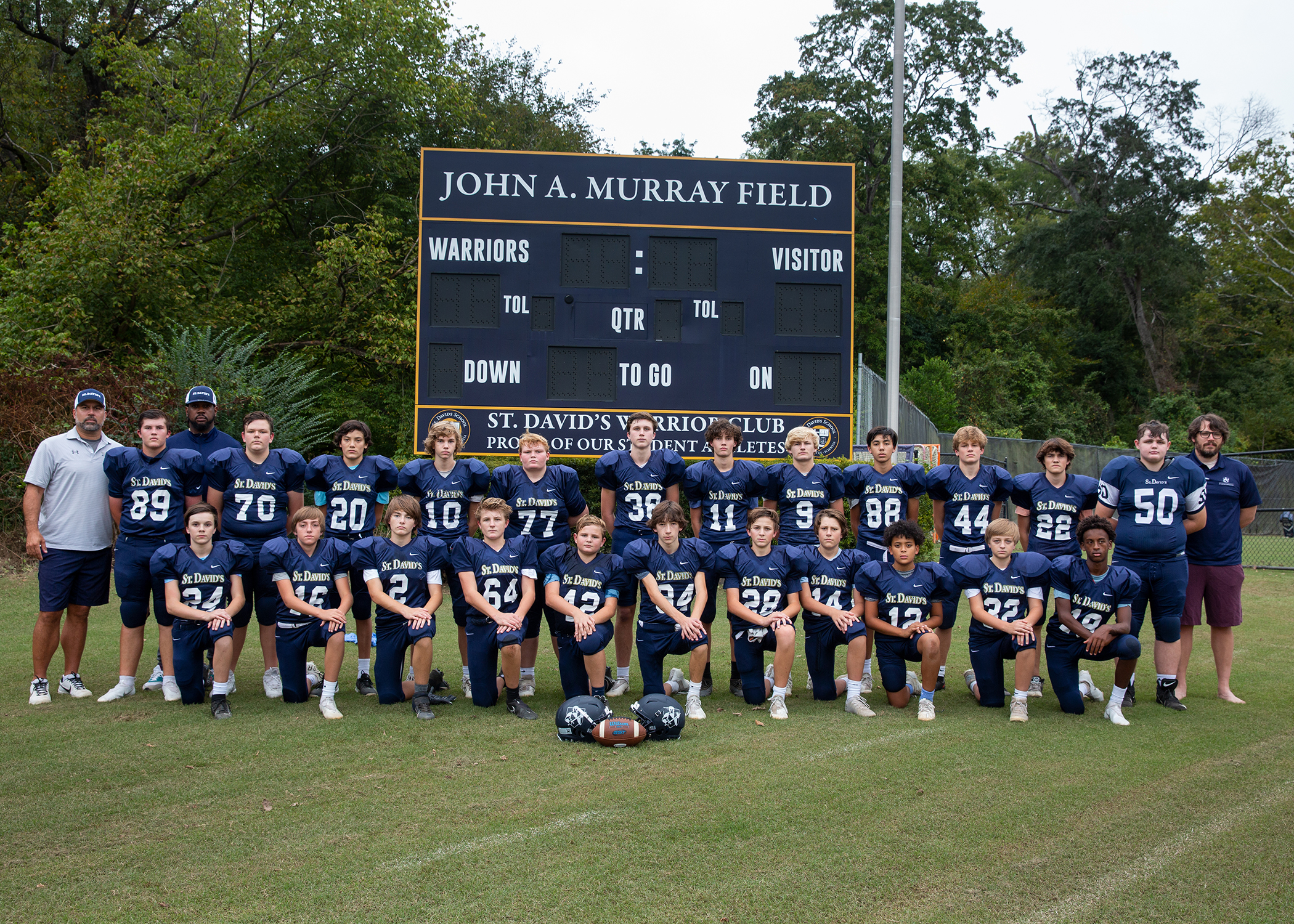 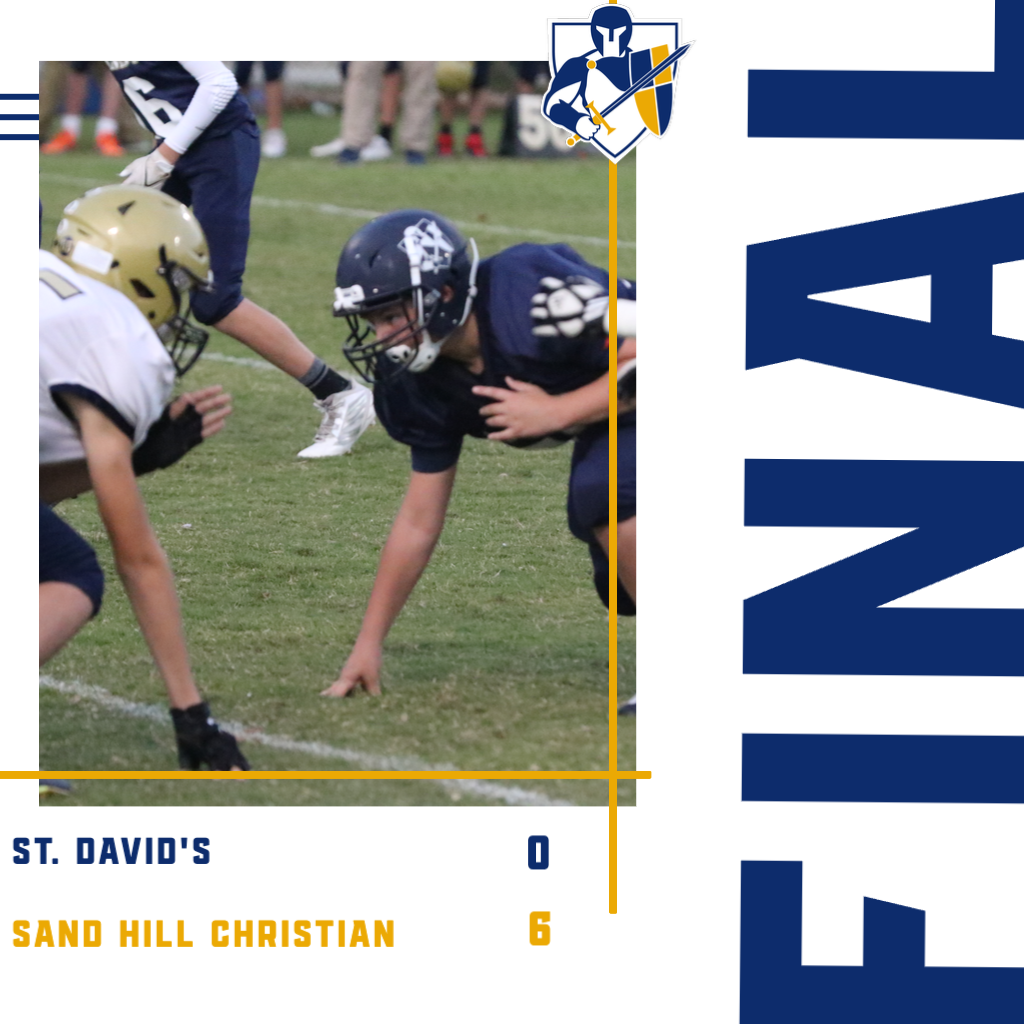 In their final game of the season, the JV Football Team faced Sandhills Christian in front of a large home crowd on Thursday, October 20th.  The Warriors allowed only one score the first half of the game with the defense flying around the field.  The offense was able to run the ball throughout the first half with Luke Deihl and Nelson Marshall carrying the ball. Quarterback Matthew Palmer completed passes in the first quarter to keep the offense on the field.   The second half of the game the defense pitched a shut out and the first play of the 4th quarter the Warrior made a deep pass from Luke Deihl to Izzy Sheehan for a 68 pard completion putting the Warriors in scoring position.  The Warriors were so close but could not get into the end zone and the  game finished 6-0.  “The boys played well today and the coaching staff is extremely proud of them.  They have improved immensely throughout the year and we really look forward to great things from this young group”.  – Coach Viera. 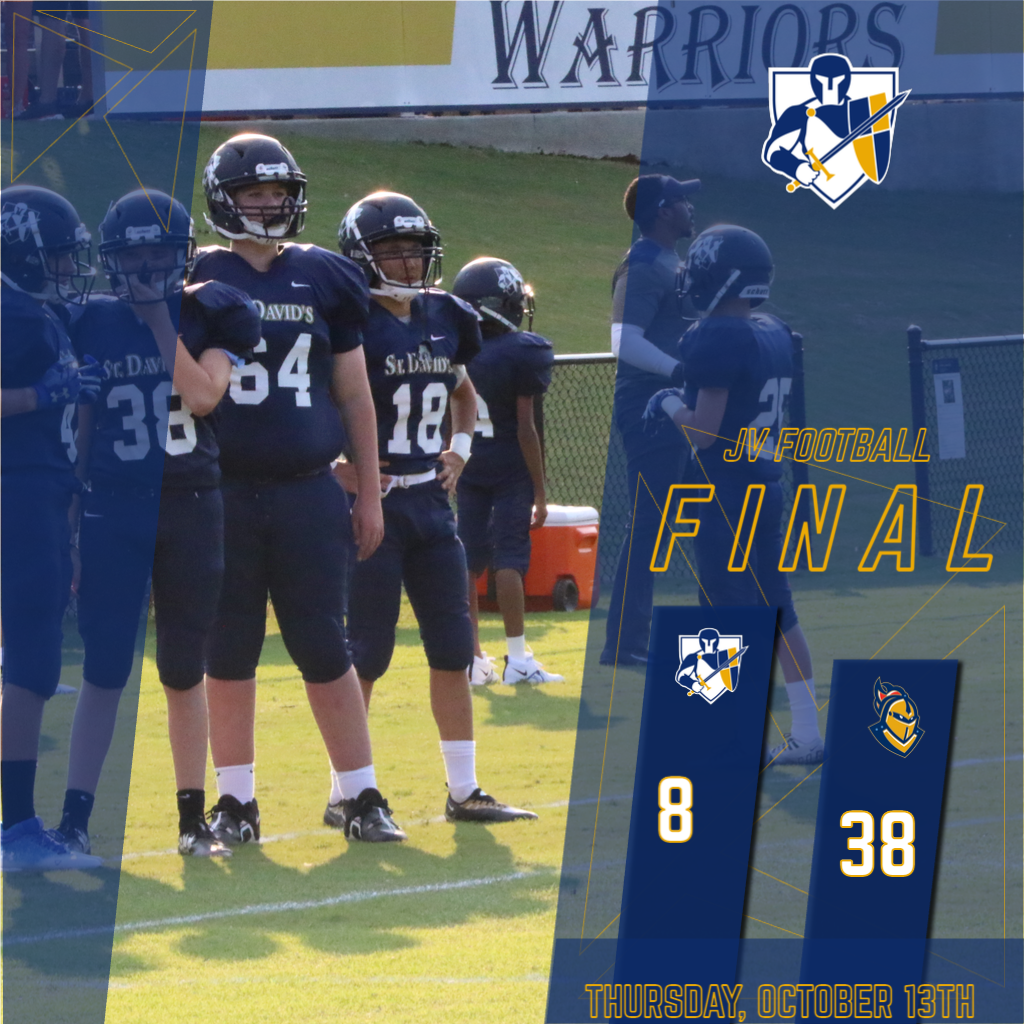 Our JV Football team hosted Cary Christian on Thursday, October 13th.  The first contest following Fall Break matched our St. David's Warriors against the Knights of Cary Christian.  The Warriors started off slow, allowing Cary Christian to get on the scoreboard first and take a 7-0 lead.  The Warriors fought back on offense but did not gain enough yards for a touchdown.  The Knights maintained their composure and continued to stack up the scoring drives and took a 30-0 lead going into the half.  The Warriors came into the second half still motivated and determined.  The hard nose play started with the Warriors defense as they made stop after stop to hold the Knights scoreless on back to back drives.  The Warriors were able to put together a few good offensive drives to move the ball down field but were unable to get into the end zone.  Cary Christian scored another touchdown and a 2 point conversion late in the 3rd to push their score up to 38.  The Warriors refused to quit and were determined to battle until the final horn went off.  The courage of the Warriors placed them into scoring position once again but this time they found themselves in the end zone for 6 and topped it off with a 2 point conversion of their own.  The Warriors held Cary Christian to only 8 points the entire second half.  Although the deficit may have been large the Warriors refused to quit and never lacked heart nor hustle.  The Warriors will be in action again on Thursday, October 20th at home against Sand Hills Christian School.  Come out and support our Warriors in their final game of the season! 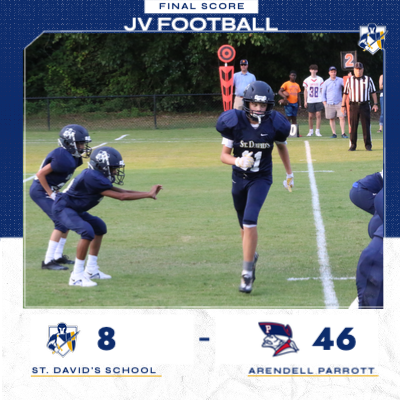 Our JV Football Team traveled to Kinston, NC to take on Arendell Parrott on September 29th.  With several players still sidelined with injuries, the Warriors walked into battle against the Pirates.  The Warriors competed throughout the game but was not able to get things going early on and was overwhelmed by a Patriots' rushing attack.  The Warriors did not hang their heads but instead continued to dig deep and battle.  The defense held the Patriots' offense in the second half and scored points through a blocked punt by James Vinson (8th grade) and a scoop and  score by Ayden VanNess (7th grade).  Nelson Marshall (7th grade) converted the 2-point conversion.  The Warriors lost 46-8 but competed until the end of the game. The Warriors are on Fall Break next week and will be in action again on October 13th at home against Cary Christian. 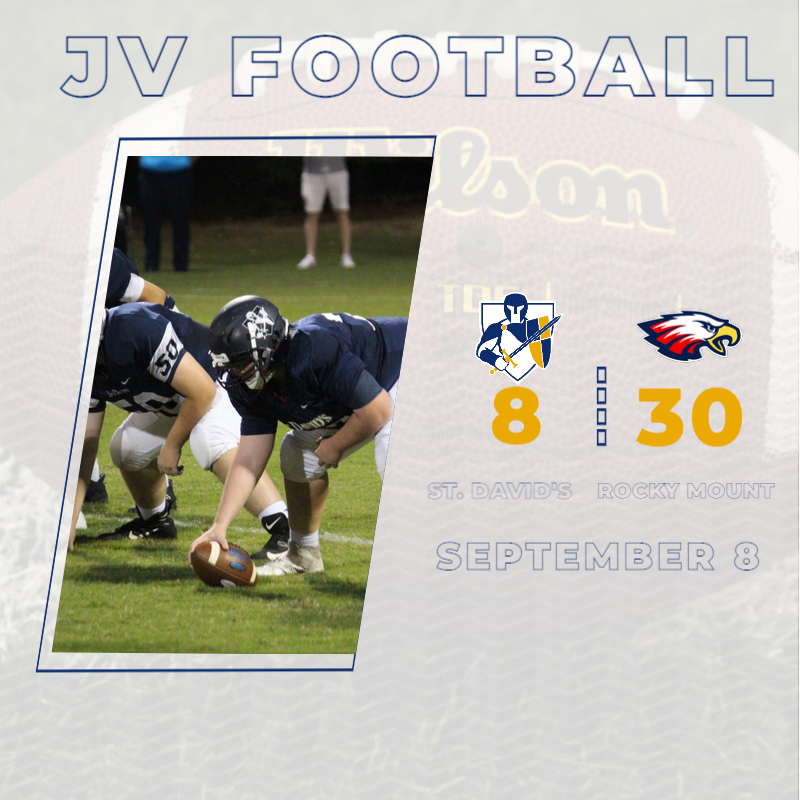 The JV Football team traveled to Rocky Mount Academy and played tough but lost 30-8. Our cheerleaders were in attendance keeping spirits high and the Warriors defense was ready to play.  The defense kept the Eagles in check but allowed some long passes for touchdowns that took the wind out of the Warriors.  Zichen Hu led the defensive charge and tallied up 8 solo tackles and 2 sacks.  Ayden VanNess chipped in with 4 solo tackles of his own and 1 pass deflection.  The Warrior offense had some opportunities to score early in the game but just came up short in the first half.  In the fourth quarter Nelson Marshall ran the ball 9 times for 83 yards.  Matthew Palmer ran the offense at the QB position and finished with a touchdown run and a two point conversion pass to Wesley Hilldale.  "I am proud of the team's progression from last week.  We really improved our game play," stated Coach Viera.  The Warriors look forward to playing their first home game next week against Wayne Christian on Thursday, September 15th at 6:30pm with our fans and cheerleaders in attendance.

The JV football team traveled to Faith Christian for the first game of the season and battled tough against the Patriots. The final score of the game was 38-14 with the Patriots taking the win.  Some highlights of the game included 8th grade Quarterback Hudson Presley throwing for a 29 yard touchdown pass at the end of the first half to Freshman Luke Deihl. The other score of the game came from an 85 yard touchdown run from 7th grader Matthew Palmer in the second half and capped with a 2 point conversion run from
Thomas Becker. Although the game did not end in a win for the team Coach Viera stated that "the boys were eager to get back to the practice field. We will look forward to improving moving forward with the team". The JV football team will travel to Rocky Mount Academy next Thursday, September 8 at 6:00 PM. 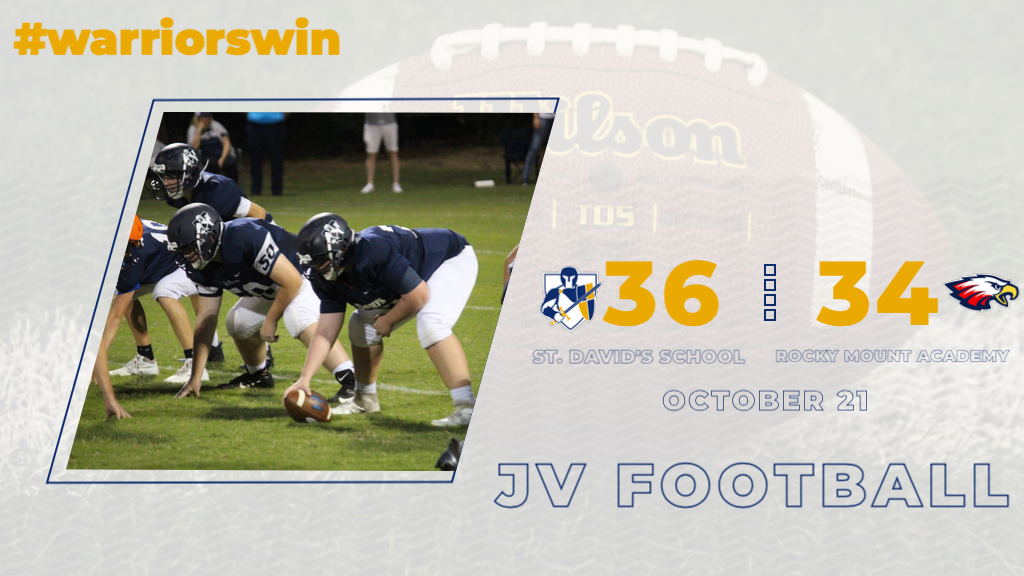 The JV boys football played on the road against Rocky Mount Academy Eagles last week on Thursday October 21st that challenged the heart of the Warriors.   The first two scores of the game came from the Eagles putting the Warriors down 14 points and on the ropes. The Warriors rallied though, behind the arm of quarterback Charlie Matthews and, continual ground attack behind the offensive line. The defense faced a big challenge from the Eagles offense but continued to hold back a relentless run attack. The true test of will came from the Warriors with 7 minutes left in the 4th quarter of the game and being down 34-28.  After the defense came up with a big stop on the 16 -yard line, the Warriors offense took the field and had a 17 play 84 yard drive that consumed 6:30 seconds of the clock to take the lead 36-34 and win the game. Coach Viera stated, "this was the kind of game where our players showed grit and determination to compete to the end." The Warriors will travel to Cary Christian to play in the JV football Big 8 Conference Championship on Thursday, October 28 at 6:30 PM. Come out and support your Warriors and the cheerleaders.

In their first game of the season, JV Football took care of business playing against Rocky Mount on Wednesday at home behind a big, supportive crowd. The team was about their business and ready to go as their eagerness of the first game showed in their high energy on and off the field. The win over Rocky Mount was had behind a lot of hard running by Christian Shaw and Luke Diehl. The teams effort and execution was "great to see", said Coach Whitworth. Charlie Matthews and Hutch Marshall connected on several deep passes. The defense was really working hard the whole game and came up with some big plays to help the Warriors out. Jake Stickney contributed an athletic interception that continued to boost the team and they finished the game with a score of 16-6. Their next match up is September 9th at Faith Christian.